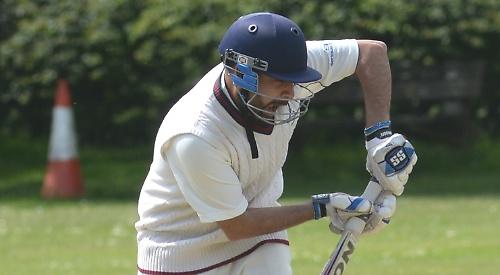 CHECKENDON chose to bat at home in their clash with HARPSDEN in the Championship on Saturday.

On a dry but true pitch, Manpreet Singh gave them a fine start by striking 10 fours in his 46 but accurate bowling and determined fielding from the visitors brought them back into the game.

Amol Tyagi was duly restrained, hitting only three sixes in a well-judged 60.

Quick left-armer Ed Birkett was the pick of the bowlers, taking three wickets for 27 runs in nine overs and there was a shrewd spell of offspin from Christian Whittaker.

The hosts’ total of 185 looked a decent score until left-handed opener Blake Hogan-Keogh set about the Checkendon bowling.

He was ably supported by Adam Birkett in a partnership of 126 and was one run short of his century when the innings came to a close after only 33.4 overs.

Birkett’s innings of 50 runs was ended after he was caught by Anthony Breakspear off the bowling of Rama Adigantla while Ben Hancock ended with an unbeaten 26.

The luckless Alfie Clifton bowled with good pace during a fine seven-over spell, but it was Sam Fooks (2-36) at the other end who made two breakthroughs during his opening spell.

Captain Ed Harris (67) and Jake Gumb put on a match-defining 63 for the seventh wicket until the former became the maiden wicket in the first team, for under-14 Oli Sedgwick (2-22). His elder brother, Jake, followed suit by dismissing Gumb for 39, but Holmer Green posted a competitive 183-9.

Clifton and Nick Sedgwick looked untroubled as they put on 41 for the opening wicket, the stand ending when Sedgwick chipped a ball to square leg.

Tom Macdonald struck a sumptuous cover driver for four second ball, but shortly after he was adjudged lbw.

Clifton departed in the same manner before Oli Sedgwick was ruled not to have ground his bat and given run out.

Dan Bacon and captain Rich Ashton both made starts before departing to leave their side in trouble, and with Kashif Iqbal (3-6) proving troublesome, Peppard fell from 87-4 to 113-9.

Some late fireworks from Sampson saw him make 15 not out from 10 balls, but when Michael Chard chipped to mid-on, the game was up for the away side.