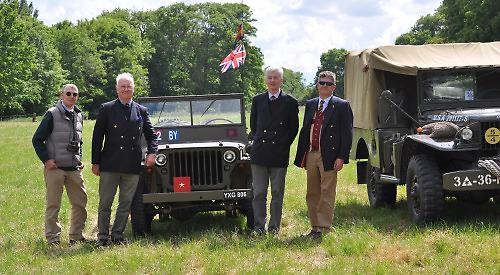 FOUR friends took a wartime jeep to Normandy to mark the 75th anniversary of D-Day.

Tony Verey, from Henley, Andrew French, from Sonning Common, Geoff Hornsby, from Checkendon, and Hugh Robertson, from Guildford, all served together in the Berkshire Yeomanry, part of the Royal Signals, based in Windsor.

To mark Mr Verey’s 70th birthday, they drove to France with Mr Hornsby’s 1944 Willys jeep which they towed in a trailer.

They drove to Portsmouth, where they caught an overnight ferry and then spent a few days driving the jeep in France, where the roads were quieter.

The jeep was adorned with a single star to represent a one-star general, the rank of Mr Verey when he was a brigadier in the Territorial Army.

Mr Robertson served as a brigadier, Mr French a captain and Mr Hornsby a colonel.

Mr Hornsby said: “Tony, Andrew and I have been retired many years but this was an opportunity to relive some of the excellent times we had together. We visited Pegasus Bridge plus Gold, Juno and Sword Beaches as well as watching more than 30 Second World War Dakota aircraft drop paratroopers on to one of the original drop zones.

“This was the first time that number of aircraft from the time had flown in such large numbers since the war and will never be seen again, so it was a very special moment.

“Highlights of the trip for me were seeing some of the Sherman tanks that my father served in during the war as part of the Guards’ armoured division. The impact of being on the beach exactly 75 years later and then visiting the graves of British and Canadian soldiers who died in the invasion really brought home to you the true cost of war and the extraordinary bravery that ordinary people showed.

“D-Day is remembered as the day we landed but the fighting in Normandy continued for several months with casualty rates as high as 5,000 people per day from both sides, plus French civilians.

“It was very special to see how the local people remembered and the flags of Britain, USA, Canada and France were flown in every town and village we passed through.”