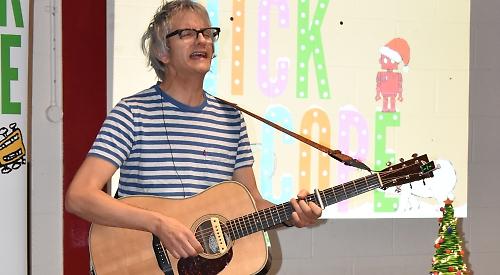 PUPILS from Checkendon Primary School took part in a ceremony to switch on the school’s Christmas tree lights.

The pupils, aged four to 11, packed into the school hall as musician Nick Cope performed.

He played the guitar and sang his own songs, including Little Green Bogey, I’m a Little Lizard, Little Grey Cloud, Deer Old Deer, Cheeky Little Elf, A Round of Applause for the Dinosaurs and The Baby’s Done a Poo. He finished his set with a rendition of Santa Claus is Coming to Town and We Wish you a Merry Christmas.

The children sang along and some of the younger pupils danced amd giggled at some of the funny lyrics.

Mr Cope was then instructed to press a button to turn on the Christmas tree lights following a countdown and the children cheered.

Then 20 pupils from the school choir sang Away in a Manger and Feliz Navidad, accompanied by music teacher Emma Davies on the piano.

Livi Thomas, eight, said: “It was really fun. We have never really had a celebration like this before.”

Headteacher Gillian Seymour said: “It was such a treat and the children loved the naughtiness.”

Kate Pullan, who chairs the parent-teacher association, which organised the event, said: “We did it because we have amazing children. We think the children deserved it.”