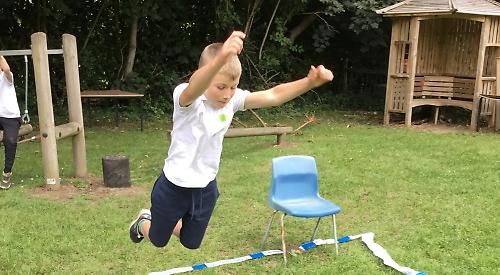 CHILDREN at Checkendon Primary School took part in a series of events for their sports day.

All 76 pupils were involved, including those who are shielding at home as teachers had organised activities to give them a chance to earn house points.

There were competitions for children from reception to year 6, including a speed bounce, long jump, egg and spoon race, shuttle run and 40m sprint. The final result was unveiled during the end-of-year assembly with Blue House being crowned champions and Red House winning the House Cup.

The events were staggered to ensure there was enough time between the different year groups for equipment to be cleaned.

Vicki Thomas, the school’s sports co-ordinator and whose children Livi, nine, and Wills, seven, are pupils, said: “Sports day is the biggest sports event of the year and that is why I was so keen to have something. Every year, it is held on Checkendon rec and all the families come to watch. It was a real shame not to be able to do that this year but we wanted to encourage the children to work together. It was privilege to be a part of it and make it happen.

“Due to social distancing, we had to do it in stages so each class had their own session. We had to stop to clean everything and the school field was divided into sections.

“It was fun doing the egg and spoon race because we had to sterilise lots of fake eggs in between races. The children love doing the sprint. Normally, it would be a full length of the rec but this year we had to use the field.”

Each year, the school works towards the School Games Mark, a government-led scheme which rewards schools for their commitment to develop competition within the school and wider community. Last year, Checkendon was awarded gold for the first time.