Cricket groundsman given lap of honour before funeral 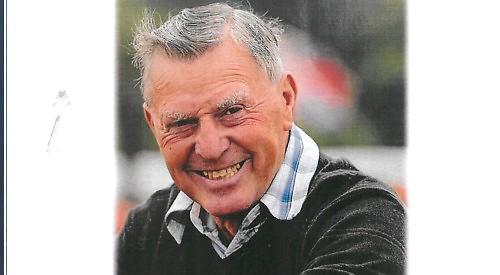 MORE than 150 people paid tribute to a man who was the groundsman at Checkendon Cricket Club for 23 years, writes Anna Colivicchi.

Stanley William George Wilcox passed away at his home in Checkendon on June 18 at the age of 79 surrounded by his family, following a short illness.

Before the funeral at St Peter and St Paul's Church on Tuesday last week, Mr Wilcox’s final trip was around the cricket ground he took care of for more than 20 years. His wicker coffin was towed on a trailer by a Ferguson 35 tractor driven by his grandson Benjamin Bexx, 23.

Friends and family gathered in small groups around the pitch to pay their respects, while his daughter Jenny Bexx, 55, son David, 58 and son-in-law Simon, 57, were among those walking behind the procession.

Yellow roses and freesias, chosen by his wife Pearl, 77, were placed on the casket, together with Mr Wilcox’s work boots. The tractor and trailer drove a lap of the field then rejoined the main road for the two-minute drive to the church, where the JCB digger, which Mr Wilcox used to carry out his duties, was parked outside.

The service was led by vicar Angela Linton and tributes were given by his son-in-law and Mark Hatt, whom Mr Wilcox worked for.

Mrs Bexx said: “We couldn’t have wished for a better day, so many people turned up. We were only allowed to have 39 people inside the church, but so many people gathered outside to listen to the service.

“We weren’t allowed to sing, but we put on Charlie Landsborough’s Love You Every Second as the service started and Hi Ho Silver Lining by Jeff Beck to finish off, which was the only song we could get him to dance to. It was a wonderful service and we all miss him terribly.

“We placed my dad’s work boots on the casket so he could walk with them during his final trip to the church. He loved being outside and never sat still.

“He was a fantastic person and a real gentleman, he liked to help everyone and did not ask for anything in return.”

She added: “It was a remarkable day, it was really lovely and he could not have had a better send-off.”

Mr Bexx said: “He was loved by everyone and really got on with everyone. It was lovely to see so many people lining the recreation ground as we took him around.”

The reception was held at the Black Horse in Checkendon, Mr Wilcox’s favourite pub. The money raised at the funeral will be donated to Sue Ryder, whose nurses assisted Mr Wilcox in his final days.

Mr Wilcox was born on October 21, 1941 in Kidmore End and had four sisters and three brothers. He was married to Pearl for 58 years, whom he met when she was 13 and his family moved to Checkendon.

They got married at St Peter and St Paul's Church in 1962.

Mrs Wilcox used to work as cleaner at Checkendon Primary School and they had two children, Jenny and David.

Mr Wilcox worked as a machine operator for W. J. Hatt Ltd in Woodcote for nearly 40 years and took care of the cricket ground voluntarily after work. He was made an honorary member of the cricket club because of his voluntary work at the pitch.

Benjamin, his only grandson, now works for the same company.