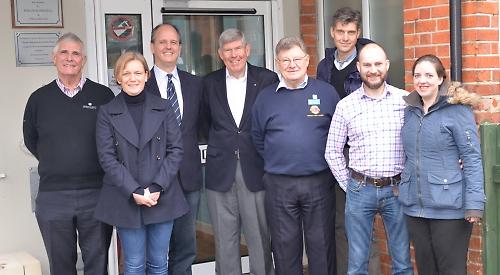 BUSINESSES have been thanked for their donations to a Henley charity.

The Chiltern Centre for disabled children invited managers and owners of companies and organisations that have helped the charity to visit the centre off Greys Road.

Paul Barrett, chairman of trustees, showed the guests round so they could see what the money they helped raise goes towards.

Mr Barrett thanked them for their support as well as Caversham Heath Golf Club, Hotel du Vin in New Street, Henley, Haringtons hair salon in Thames Side, the Strada restaurant in Bell Street and Starbucks in Market Place.

He said: “I wanted to take the opportunity to thank you and show that we don’t take for granted what you give us. It’s a thanks to the local community and businesses who have supported us for so many years that we are able to keep going.

“It’s amazing that we get such support and it’s this kind of thing that makes Henley the wonderful place it is.

“We are lucky to work and live in Henley and to have this centre supported by the local community.”

The Baskerville has raised more than £2,000 over the last three years with a Christmas Eve carol service at the pub in Station Road and the sale of home-made Christmas puddings.

Mr Hannah said: “There are 300 people at the carol service who pay £2 for a song sheet and we close the restaurant for the night.

“Every business should do its bit — it’s part of being in the community and the Chiltern Centre is one of the most worthy causes around.”

Mrs Hannah added: “We don’t make any profit on the puddings. We sell them for £15 each and all the money goes straight to the charity.”