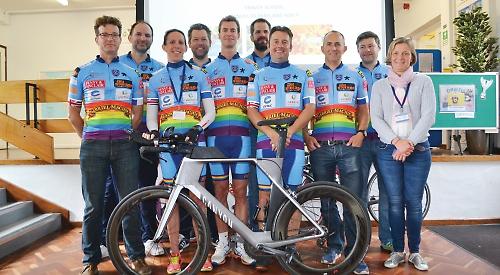 A TEAM of more than 30 cyclists will be taking on a 200-mile challenge to raise money for the Chiltern Centre for disabled children.

The Henley to Paris bike ride will see the group set off from the town on Friday, June 23 and attempt to reach the French capital within 24 hours.

They will ride from Henley to Brighton, before crossing the Channel to Dieppe in France and travelling down to Paris.

The challenge will see them climb more than 3,000m and burn an estimated 10,000 calories, the equivalent of 100 bananas, while they will be wearing special blue jerseys with a rainbow design on it, the colours of the centre.

The team comprises several parents at Trinity Primary School in Vicarage Road and they attended a special assembly at the school last Friday, while pupils had also held a competition to design equipment for the challenge.

The riders are hoping to raise £30,000, which will be split between the centre in Greys Road and the school. They have been taking part in a gruelling training regime to prepare for the ride, including a 95-mile ride in Wales earlier this month.

Liz Deacon, community fund-raiser for the centre, said: “It’s a massive challenge that these cyclists are undertaking in less than two weeks’ time and the time and effort they have put into training is amazing. We are so grateful for their support.”

She added: “We will be supporting them throughout the process and hope that the relationship between the Chiltern Centre and Trinity will continue beyond the big cycle.”