Ice to be here, says Schofield 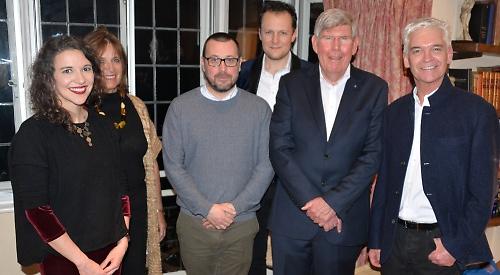 TELEVISION presenter Phillip Schofield attended a charity thank-you event — but he couldn’t quite keep his mind off the day job.

The co-host of ITV’s Dancing on Ice was the star turn at the reception for supporters of the Chiltern Centre for disabled children in Henley.

Schofield, who is patron of the respite charity, and his wife Stephanie were among more than 30 guests to attend the annual event held at the Bix home of Gaie Scouller, who has supported the centre off Greys Road for 16 years.

He joked about having to witness an ice dance routine by The Only Way Is Essex star Gemma Collins the night before Monday’s event.

The group included Ian Gallifant, Yvette Kershaw and Nick Steel, who will be taking part in a fund-raising climb of Mount Kilimanjaro on Sunday, and town councillor Will Hamilton, who will run the London Marathon in April in aid of the charity.

The guests were served Prosecco or soft drinks and hoisin duck and salmon canapés prepared by supporter Charlotte Stuart.

There was a short opera performance by Alex Haigh and Rosemary Clifford, whose set included Nella Fantasia from the film The Mission and the audience was encouraged to sing along.

Schofield, who lives in Fawley and also co-presents ITV’s This Morning with Holly Willoughby, called the performance “absolutely stunning” and said that it wasn’t what he had been used to lately.

He said:  “As we were listening to that, I suddenly thought this time last night I was watching Gemma Collins skate. What a change of culture.”

Schofield, who posed for “selfies” with some of the guests, said he was delighted to support the centre.

He said: “We have been involved for a very long time and you have no idea how special you are. Nothing would happen without our friends. Thank you from the bottom of our hearts.”

Paul Barrett, who chairs the charity’s trustees, thanked everyone who has supported or donated to the centre in the past year and then warned of more challenging times ahead for fund-raising.

He said: “It is hugely important to have friends like you.

“We do not take our friends for granted and success is no guarantee of further success.

“I do think this year is going to be quite uncertain. Local authorities are running out of money.

“ I am not sure what 2019 will bring, but we will need you more than ever. You never know what will happen. Thank you very much.”

• Collins was voted off the show on Sunday followjng a skate-off.