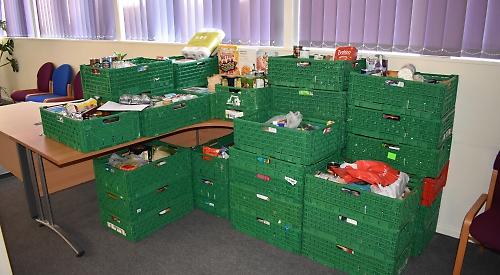 HUNDREDS of items were collected by pupils at Chiltern Edge School in Sonning Common for a food bank’s Christmas parcels.

A competition was run between tutor groups at the secondary school to see who could collect the most items.

The competition ended in a draw between 7A and 10A for the most donations.

The 36 crates were delivered to ReadiFood, a charity based in Whitley, to be used as part of its Christmas food parcel scheme by PE teachers Sarah Cheeseman and Shaun Burningham.

Miss Cheeseman, who organised the initiative, said: “It’s good for the children to do something positive and spend some time thinking about the wider community.”

Mr Burningham, who is the tutor for the 7A pupils, added: “It’s amazing what the pupils have done. I’m proud of them all.”

Headteacher Moira Green praised the efforts of students, parents and staff for helping the appeal.

She said: “We are thrilled to be able to help out. The school is here to stay and we want to be an integral part of the community going forward.”