Boys can wear skirts to school... but not shorts 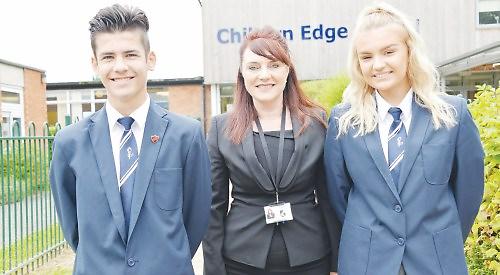 TEENAGE boys have been told they can’t wear shorts at school if they’re too hot — but they can put on a skirt.

Chiltern Edge School in Sonning Common says that shorts are not part of its new uniform and that students must stick to the rules, which state that only trousers or skirts can be worn.

But a parent who queried this was told that the uniform policy was “gender neutral” and that if a boy didn’t want to wear trousers in hot weather he could put on a skirt instead.

The secondary school in Reades Lane introduced the uniform, which features a blue blazer, white shirt, grey trousers or skirts and black shoes, in September. It was part of a drive to improve the school after it was rated “inadequate” by Ofsted in April last year.

The school is now deemed to be improving and is set to become an academy when it joins the Maiden Erlegh Trust in August. Alastair Vince-Porteous, from Caversham, contacted the school to ask whether his 13-year-old son could wear a pair of tailored, grey shorts as he suffers regular nose bleeds which become more frequent when it is hot. He said: “I wanted to try to make him a bit cooler and the shorts would help with that but I was told shorts are not part of the uniform.

“I know that in the past boys at other schools have worn skirts so I asked if he would be able to do that if he wanted and they said ‘yes’.

“They mentioned its policy being gender neutral, which is a very modern thing.”

Mr Vince-Porteous said he didn’t have a problem with boys wearing skirts but that they should have a choice of shorts in the summer term, as happens at Gillotts School in Henley.

He said: “It’s not necessarily just a problem at Chiltern Edge, it’s schools generally. Gillotts is an example of a school which has moved with the times.

“When I raised it on the Chiltern Edge School Association Facebook page, people were saying it should be about choice when the weather is hot.

“I’m not saying it should be shorts all year round but for the two months of the summer term when it gets hot.

“It would still be a smart uniform with blazers, shirts, ties and school shoes but the email I have had from the school says it has its policy and that’s the end of it.

“It’s a shame we can’t be more grown up about it. We aren’t asking for rara skirts or skinny jeans, just grey tailored shorts for two months a year — it’s not a big deal.”

Fellow parent Rich Grant said the new uniform did give the pupils pride in their appearance but the policy should be more flexible.

“They all still want to play football in the breaks,” he said. “We send our kids to Chiltern Edge, not Eton. For every kid who would wear shorts you will have one who thinks he’s outgrown that look but it’s about choice and comfort.”

Graham White said: “When the new uniform policy was introduced, the school preached that a smart child would concentrate better and achieve more.

“While most of us think this is a load of rubbish, taking the school’s stance, children who are comfortable because they are wearing shorts, not blazers, and feeling a bit cooler and not overheating, could concentrate better and achieve more.”

Joanne Munday said there had also been a debate about students wearing shorts at Highdown School and Sixth Form College in Emmer Green.

She said: “It’s nuts to make the kids wear blazers and ties when it is very hot.

“The reason given at Highdown was that it is more ‘business-like’. Well, they need to move with the times because many businesses don’t enforce ties any more as part of ‘business dress’ at any time of year!

“And if people say the kids need to stick to the rules, well, change the rules!”

Chiltern Edge Headteacher Moira Green said: “In September 2017 Chiltern Edge, with the support of parents, made the decision to move to a more formal uniform. This has been successful.

“Maiden Erlegh Trust, in preparation for September 2018, wholeheartedly supports Chiltern Edge’s adoption of a more formal uniform which is very much in line with its own.