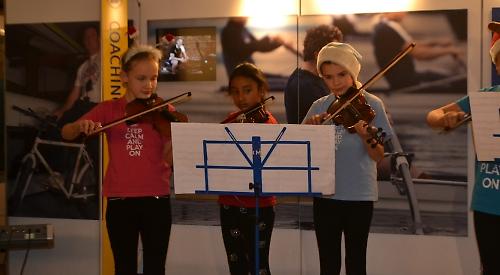 DOZENS of children showed off their musical talents on the fourth night of the Henley Living Advent Calendar.

The group, run by Laura Reineke, of Berkshire Road, offers music education in all forms to any child regardless of age, ability, means or background.

All of the performers, aged four to 18, attend music school Sunday, a monthly event run at Shiplake College, where they are given a chance to learn instruments and practise their skills.

They all wore t-shirts saying “keep calm and play on” and most wore festive hats as more than 150 people watched on in the audience.

Richard Rodway, chairman of the calendar, encouraged them to buy raffle tickets and said it had been the best ever start to fund-raising for the event.

To begin the performance Mr Rodway led the crowds from the museum’s foyer up some stairs into the Schwarzenbach International Rowing Gallery where a stage had been built.

Some of the songs performed were Rockin’ Around the Christmas Tree, 12 Days of Christmas and We Wish You a Merry Christmas.

There were also performances by groups of flutists, violinists and a samba drumming showcase.