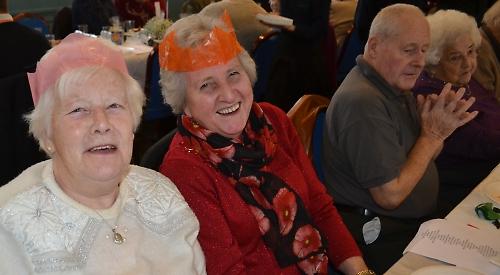 MORE than 100 people were fed and entertained at the Mayor of Henley’s Christmas party for the elderly.

The guests at the lunch at the town hall on Tuesday included residents of local care homes.

They sat at three long tables in the main room at the town hall, which had been decorated by council staff. Some wore paper Christmas hats and pulled crackers.

The pensioners were welcomed by the Mayor Kellie Hinton and Rev Duncan Carter, vicar of Holy Trinity Church, who said grace before the lunch of sausage rolls, sandwiches, quiches and sausages followed by Christmas pudding, trifle and mince pies. Pupils from Gillotts School served the food and cleared away the plates afterwards as well as chatting to the elderly people.

Clarinet player Dennis Saunders played for the guests during the meal before sitting down to have something to eat himself.

After the food, about 25 members of the school choir, Gillotts Voices, took to the stage to perform. Their repertoire included the hymn For the Beauty of the Earth, The Little Drummer Boy and pop song Riptide by Vance Joy. During their performance of The 12 Days of Christmas, the children held up laminated sheets depicting each gift.

Frances David, the school’s head of music, accompanied the children on the piano.

She said: “They really enjoyed themselves and had some really nice chats with the guests. It’s a nice thing for them to do.”

The party also included a bingo game with the numbers called by town councillor David Eggleton, the Mayor’s escort, and a visit by Father Christmas. Raffle prizes included biscuits, wine, toiletries and gifts from companies such as Invesco Perpetual, Newtown Car Services and the Hot Gossip coffee shop.

There was laughter among the guests when it was announced that Blandy & Blandy solicitors had donated a pair or wills.

The Mayor had to redraw the winning ticket for a bottle of sherry after discovering she had won it.

Councillor Hinton said: “It was really lovely — everyone was so complimentary about the food and being in the town hall.

“Everybody enjoyed themselves. The prizes and contributions from businesses around the town were too many for me to mention. It’s phenomenal how the community supported the party.

“The Gillotts Voices were amazing at serving and providing entertainment. This has definitely been one of the highlights of my mayoral year so far.”

Guest Colin Saggers, 74, of Watermans Road, said: “It’s very nice, I’m enjoying myself. It’s a good set-up and I’m very grateful for what they all do.

“The children from the school who are bringing the food around are very nice and so are all the staff and helpers.” Chris and Anna Ambrose, also of Watermans Road, were attending the annual event for the first time.

Mrs Ambrose, 71, said: “It’s unbelievable. Just being here is great and we’ve had good company. Thank-you to the schoolchildren who have been so lovely.”

Audrey Oliver, 74, of Vicarage Road, said: “This gives us a chance to get out and meet people.”