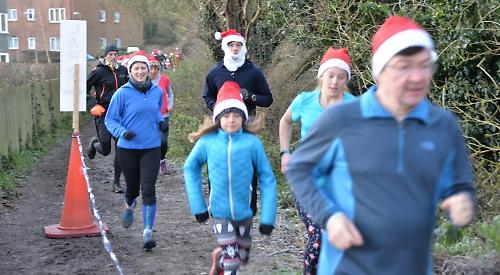 The traditional event, which began six years ago, was cancelled last month by the town council, which said it cost too much to organise.

Mayor Kellie Hinton then persuaded Henley parkrun organiser James Barr to allow the event to piggyback his run, which takes place at 40 Acre Field every Saturday.

Mr Barr launched the 5km run in July and it is part of a national network of events with runners’ times logged on a website. Entry is free.

Councillor Hinton was among those who took part in Saturday’s run dressed in festive costumes along with fellow town councillors Will Hamilton, Glen Lambert and Sarah Miller.

Santa hats were provided for runners who needed them.

The ground was frosty and hard as the runners went round the field in below-zero temperatures.

Cllr Hinton said: “It was a really fun event. I was the tailwalker so I walked behind everyone else, which suited me perfectly.

“I ran a 5km earlier this year but since then I’ve had a knee operation so running would have put too much pressure on my knee. It was actually perfect for me as I marshalled and was still able to do the course. I’m really pleased the other councillors came out to support the event.”

Cllr Hinton thanked Mr Barr for his support and said it would make sense to combine the Santa fun run with parkrun in future.

She said: “When it was previously held there was no Henley parkrun so now we should make use of it.”

Saturday’s event raised £23.20, which will go towards the running costs of the Henley parkrun.

Mr Barr, who wore a full Santa outfit, said: “We were delighted to be asked by the Mayor to help put it on and would be happy to go ahead with a themed event again in the future.”

The previous Santa fun run was started in 2011 by then Mayor Pam Phillips and involved a two-mile jog, starting and finishing in Mill Meadows. As many as 150 participants took part and small prizes were awarded to the fastest runners as well as for the best fancy dress outfits.

The event made up to £500 each year for the Mayor’s charities.