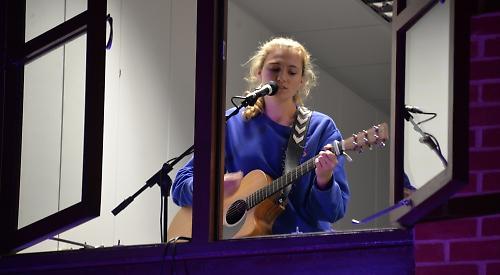 VETERAN broadcaster Mike Read was one of two performers on the eleventh night of the Henley Living Advent Calendar.

He sang and played guitar from the first floor window at Handelsbanken, in Greys Road car park, to an audience of about 80 people.

Read, who lives in Henley, was followed up by 18-year-old Katie Green, from Harpsden, who also sang and played guitar.

The former Radio One DJ paid tribute to his friend Keith Chegwin, who passed away yesterday, before starting his set.

He performed Rudolph the Red Nose Reindeer and Jingle Bells and the audience joined in to sing along.

When he finished he introduced Katie, who attends Queen Anne’s School in Caversham.

Her set included Little Lion Man by Mumford & Sons, Sunday Morning by Maroon 5, Let Her Go by Passenger, Fix You by Coldplay and Kiss Me by Ed Sheeran.

Katie said: “I really enjoyed it. I have never sung out of a window before so that was a new experience for me, I don’t know if I’ll ever get a chance to do it again.

“I’ve come to watch the advent calendar before so it was nice to come and do it. The crowd was bigger then I was expecting. I hope we raised a lot for the charity.

The performance was raising money for Camp Mohawk in Wargrave.

Richard Rodway, organiser of the Living Advent Calendar, praised both the performers.

He said: “I really enjoyed both performers. Handelsbanken provides a quintessential advent night by performing from their window, it provides some pomp and ceremony.

“I like the mix of the established act Mike Read and a young up-and-coming artist Katie.”

Tonight’s performance (Tuesday) will be held at Hotel du Vin in New Street.