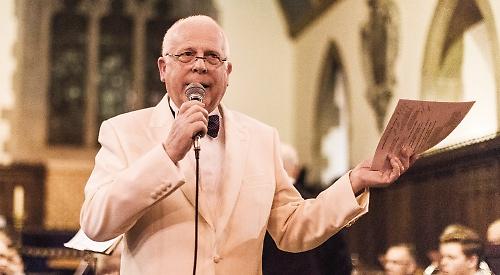 ST MARY’S Church in Whitchurch was full to capacity for the fifth annual Christmas concert by the Ferryboat pub’s brass band.

The event, which also featured soloists from the village and a 40-strong choir of pupils from Whitchurch Primary School, raised almost £3,000 for the church, the school and the village pre-school.

The band, which was assembled by the Ferryboat’s landlord Graham Dednum after he took charge of the High Street pub in 2012, played Sounds Like Christmas, Rise Up Shepherd And Follow, Go Tell It On The Mountain and Rockin’ Around The Christmas Tree.

The school choir, conducted by teacher Lucy Lombos, performed Do You Hear What I Hear? and everyone sang Hark! The Herald Angels Sing, Calypso Carol, O Little Town Of Bethlehem, Deck The Halls and other festive classics.

Rev Claire Alcock, of the Langtree team ministry, gave a talk on “Christmas thoughts” and thanked the event organisers.

Mr Dednum, who used to organise the Salvation Army carol concerts at the Hexagon in Reading, said: “It was a very successful evening.

“We were only £200 short of £3,000 but should exceed that by the end of the month with further collections.

“I floated the idea with the church when I moved to the area and it has grown from there.

“People love it and the parents and grandparents are always really proud to see their children singing with the choir.

“The pupils always put on a marvellous performance and the band very kindly give their time for free so it’s a real community effort.”