Butcher who's almost as busy as Father Christmas! 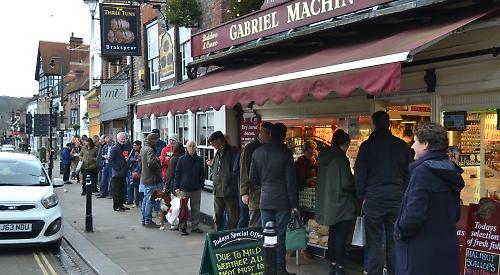 IT has become a familiar sight in Henley market place in the last few days before Christmas each year.

People queue up outside butchers shop Gabriel Machin, waiting to pick up their turkey or other choice of meat for the dinner table on the big day.

Customers place orders as early as September but it is this week that the shop is at its busiest.

Barry Wagner, who owns the business, and his staff begin work at 5.30am each day preparing items for
collection.

This year they have taken orders for more than 500 turkeys, 80 geese and 50 cockerels.

The birds are stored in a special fridge at the back of the premises before they are collected.

Mr Wagner, 43, says: “It’s very busy and quite stressful with a lot to remember but we are responsible for the most important meal of the year.

“I love the job, serving people and making a difference to families in our community. Machins is an institution in Henley and we want to keep that going.”

Mr Wagner, who lives in Ashford, Middlesex, trained as a butcher when he was a teenager.

He worked at and managed shops in his home town, Weybridge and Oxford before moving to Machins 13 years ago.

He worked with Ian Blandford, who used to own the business, for more than 20 years at various shops in the Home Counties before buying the shop in Market Place in 2015, so this is his third Christmas in sole charge.

Mr Wagner says he has taken more orders this year than ever before.

“We will take orders right up until Christmas — we never turn anyone away,” he says.

Preparations started in September with the curing and smoking of meats and fish in order to be ready for the Christmas trade.

All the curing and smoking is done on site by Mr Wagner and his four full-time staff, Przemek Sztuba, Lukasz Janczarski, Christopher Edwards and Ollie Cooper.

Mr Wagner also submits a preliminary order of turkeys to Starveall Farm in Aylesbury, the butcher’s supplier, based on the number of orders in previous years. He says: “As well as turkeys, some of the big items for us are gammon, ham and smoked salmon. We dry cure all our bacon and we store it for a number of weeks before it’s done.”

Extra beef was put out to hang for four weeks at the end of November, which improves the quality, flavour and tenderness so it’s in prime condition for eating next week.

In an average week the butcher sells 160lbs of sausages but this week it will be about 500lb.

Temporary staff have been brought in to help this week, including Mr Wagner’s 15-year-old son Alex and Mr Edwards’s brother Tom as well as Mr Blandford, who lives in Chinnor.

In the run-up to Christmas, Mr Wagner gets up at 4am to drive from his home to Henley and doesn’t get home at night until about 10.30pm.

He says: “I’ll be setting up the shop window and making sure everything is ready when people come in.

“I have to make sure the orders for that day are ready, then the orders from restaurants and residential houses are ready for our driver to come and do those. We have a very loyal customer base and it helps us to pick up more customers.

“People move into the area and some move out of the area but continue to use us. There are different faces from all walks of life.”

Even when the queues build up outside the shop, Mr Wagner says he and his staff do not feel rushed or under pressure.

“It’s all organised,” he says.“Everyone has their order numbers but a queue builds up because of the amount of stuff we have to go and get.

“It is all set to one side but it all still needs to be picked up from the back and taken to the front. It can’t be done any other way. It’s that time of year when people are buying enough turkey and ham in order to get through to the New Year.”

Mr Wagner takes all the orders himself and they are kept in two special ringbinders in alphabetical order.

He has never been tempted to swap to a digital system. “We have a box filing system and for me it’s the most assured way,” says Mr Wagner.

“Every customer gets a copy of their order when they make it. I think people like the way we do it as it is the way it has always been done.”

Despite the booking system, there are always people who come into the shop on Christmas Eve wanting a
turkey.

Mr Wagner explains: “There are always one or two every year. Either they think someone else had ordered their turkey or there has been some kind of confusion or change in plans.

“Sometimes there’s snow and they can’t get to where they had planned. I always have some back-ups available.”

Leaflets are available in the shop to help people with cooking their birds.

Mr Wagner said: “The days when people had to get up in the middle of the night to get the turkey in the oven are, thankfully, gone. These days you can get a 6kg turkey done comfortably in two or three hours. They don’t need to be in the oven for 12 hours anymore.”

He is full of praise for his staff for their commitment and hard work.

Mr Wagner says: “We all enjoy the job and if we weren’t busy at Christmas we would be devastated as a business. It’s a big time of year and therefore we do everything we can to keep everyone happy.

“Through the years Machins has always offered good quality service and the best possible produce. It makes me proud we have a queue in the days up to Christmas. We don’t want to forget or miss anything.”

The shop makes special sausages and burgers for her 10-year-old daughter Lilian, who is allergic to nuts, sesame, dairy products and eggs.

She has ordered a turkey and a ham from the butchers for Christmas.

Miss Graham says: “I buy all my meat from Machins because I have 100 per cent faith in them. They are amazing and understanding about the ingredients in their sausages and burgers.

“I have friends that go in and ask for ‘Lilian-safe’ sausages because of how good they taste.

“Barry has done a fantastic job since taking over from Ian.”

Mr Wagner will sit down on Christmas Day with his partner Vikki and children Ellie, 18, and Alex, for roast turkey with all the trimmings.

“Vikki is brilliant,” he says. “She helps me with all our paperwork and makes sure I have a good meal on the table every night when I get home.”