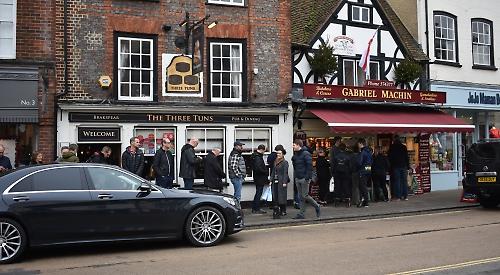 RETAILERS in Henley have said business over the festive period was strong.

Most traders had a small increase or similar takings to Decembers in previous years.

Some reported an increase in business in the last few days before closing for Christmas and others said loyal customers had helped boost sales.

Others complained footfall was not as high as previous years and said there were problems with the annual late night shopping festival.

Alan Mann, owner of Henley Sports in Greys Road, said strong sales in December had topped off a good year for the business.

He said: “Year-on-year we have been up and December was busier then last year, especially in the final few weeks before Christmas when I was very, very busy.

“People came in and told me they had ordered things online but they had failed to be delivered so they were coming into the shop and buying it.

“We had a spread of regular customers coming in for sports kit, people buying gifts and those coming in for big items as presents.”

Anthony Galloway, owner of The Vintage Look in Hart Street, said the number of sales and takings were both up year-on-year.

He said: “We had a strong month and it was up compared to previous months.

“More people are getting to know us and our business every year and they come back to us.

“You have to build that relationship with customers and clients. That’s one of the reasons for our trade in December.”

Mr Galloway said the town had good support for retailers in the festive period but more help was needed at other times.

He added: “Trade in December tends to take care of itself, but it’s times like now in January, February and March where I feel more could be done to drive more people into the town.”

Laura Loveridge, manager of Temptation Gifts in Bell Street, said sales on the final days were due to online retailers not being able to deliver.

She said: “Once online shopping can’t be done anymore they come in for bits and bobs. The weekend before Christmas we were very busy. The Friday, Saturday and Sunday were the best time for us.

“A lot of the big shops were only able to deliver on orders from the Wednesday before Christmas. It had been quieter then it has been before but it was still fairly busy in the run up to Christmas.”

Mrs Loveridge said the late night shopping event helped trade but the free parking on Tuesdays in December had little effect for the business.

She added: “We didn’t see any noticeable increase in trade on Tuesdays even with the free parking. It might be better to run the free parking on days closer tot he weekend.”

He said: “Christmas and December is always quite a busy time for us. Books are the oldest Christmas present of all and we have all sorts of books that most people would love to receive as gifts.

“It was a pretty good year for us. It came in fits and starts but it was very, very busy. There are little peaks through the month.

“Most people stop buying online when they are unable to deliver after December 22 or 23. That morning the shop was manic, which was lovely.”

Mr Jonkers said Henley’s Christmas festival and late night shopping was not helpful for his business as Hart Street was used for fairground rides.

He added: “We have the rides put in front of our shop, which nullifies any prospect of us being able to stay open. It used to be more of a Christmas market.”

Ana Senegeac, manager of Joules in Market Place, also expressed concerns about the festival – which is held on the first Friday of December every year.

She said: “The late night shopping festival should not be called that, it is not something for the businesses. It’s more like Winter Wonderland.

“When people come into the shop its to warm up rather then buy things.

“There should be another night specifically for late night shopping where people know the shops are going to be open until 8pm, 9pm or 10pm.”

Ms Senegeac said sales had been good but worried about footfall in the town.

She added: “Footfall has dropped off but as December went on sales were still alright for us. I think it depends on each business. Joules does well because it has a strong brand.”

She said: “It was a really good festive period for us. It’s difficult to say how well because we have only been back in the shop for a few days.

“It always feels busy in December. There were a good range of books out this year and I think a lot of independent booksellers are on the upturn.

“Its fashionable for people to go and buy books from an independent seller. We find there is a lot of support from people in Henley for us.”

She said: “Our business has been constant and steady. We definitely have loyal customers.

“One issue they always flag up is parking. That is what our customers says but that is a standard thing that has not improved over time.”

Matthew Stone, who runs chocolate shop Gorvett & Stone in Duke Street, said he was happy with his business’s performance in the run up to Christmas.

He said: “It was very busy for us. I haven’t done a full analysis but I would say we are similar or slightly up on last year. It was in line with what we were expecting.

“Trade on Sundays was down but that was to do with the weather, we had snow one Sunday and on December 17 we were hampered but it pouring down with rain so it was quiet in town.

“The amount of trade has grown on Sundays in the last couple of years but this year it was down.

“There is no bump in trade around free parking on Tuesdays, I think that’s because not enough people know about it.

“Most things that could be done to help traders are being done, there isn’t anything obvious I would do differently.”

Barry Wagner, owner of Machins butchers in Market Place, said trade was similar to last year and at expected levels. As usual in the days running up to Christmas customers queued down the street to collect items from the shop.

Staff from Starbucks in Market Place brought hot drinks samples out to those who were waiting.

Mr Wagner said: “We were where we expected to be and it was on a par with last year. I felt footfall was similar to previous years.

“I think the late night shopping is a good way to start December get people into the town. It gives shops a chance to showcase themselves, so I think it works well.”

Laurence Morris, who runs the menswear shop Laurence in Duke Street, said his turnover was up but footfall had dropped.

He said: “In a nutshell, because footfall was down spend per customer was slightly up.

“Leading up to Christmas town seemed a lot quieter then it had in previous years. Whether that was the weather or whatever else, I do not know.

“Talking to customers, they felt the town was quieter. The way town is going there needs to be some drastic action.”

Mr Morris, who opened the shop in 2012, said there were too many nail bars, coffee shops and charity shops.

He added: “What we need, and this has to be done in cooperation with landlords and estate agents, is to find a way for more independents to come in, which will work to attract more people into town.”

Helen Barnett, town manager for Henley, said the town council would be reviewing all its festive events later this month and working to improve them.

Some retailers will be attending to give their feedback.

She said: “We will be going back to basics and looking at who we are running them for and what the benefits are.

“We want to deliver the best events for the town and use them to drive footfall. We need to examine closely who is benefiting from the events we are organising.”

Ms Barnett said the parking was on Tuesdays to help drive footfall in the earlier parts of the week when footfall was usually lower.

She added: “It is a historic fact that more people go shopping towards the end of the week. We are trying to encourage people to spread their shopping across the week.”

In November, Ms Barnett told the Henley Standard she had done all her Christmas shopping in the town.

Two people had been in touch with her saying they had done the same after reading about it.

Ms Barnett said: “While its only two people who got in touch with me, hopefully more have done the same.

“The shops we have in the town are very good quality and there is a good variety. We could use more menswear and more ladies fashion but what we have is very good.

“We are trying to encourage more people to shop locally.”