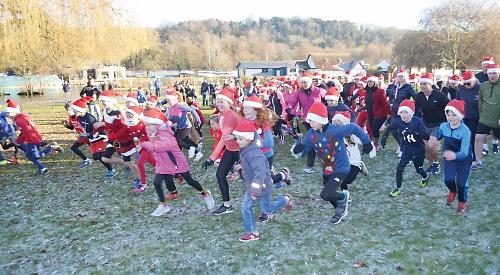 THE Henley Santa fun run will be held this year.

It will take place on Sunday, December 9, beginning in Mill Meadows.

The event, which began seven years ago, was cancelled last year by the town council who said it cost too much to organise.

The fun run’s revival was announced by town councillor Sarah Miller, who said that former mayor Pam Phillips, who launched the event in her mayoral year in 2011, would be helping with the organisation.

Cllr Miller said: “We are both really excited and hope many families join in.”

The event will raise money for Mayor Glen Lambert’s charities, Gillotts School in Henley, Henley Music School and the campaign to launch a respite service for dementia sufferers and their carers.

He said: “I am very grateful to Sarah for relaunching the Santa fun run.

“She and I joined the park run dressed as Santas last year after the Santa fun run was cancelled.

“That proceeds will go to the Mayor’s charities is something I really appreciate because as my year progresses I’m able to focus more time on my charities and fund-raising is a key part of that.”

The full route of the run is still to be confirmed. The previous fun run involved a two-mile jog, starting and finishing in Mill Meadows.

As many as 150 participants took part and small prizes were awarded to the fastest runners as well as for the best fancy dress outfits.

In her mayoral year, Cllr Hinton had planned to change the route so that it finished in the town centre but this was scrapped.

She said there had been negative feedback about the previous route with people complaining that it used back streets and did not take advantage of the town’s beauty spots.

This year’s Henley Christmas Festival will be held on Friday, November 30.