When the royals tried to censor my playing cards 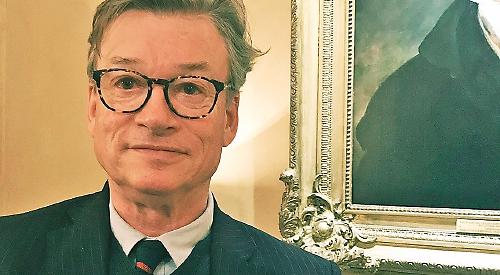 EXACTLY 25 years ago this Christmas, an idea was born.

In the little village of Turville Heath, high in the Chilterns, a stone’s throw from Henley, local art historian (late of the V&A) and publisher Nicky Bird was preparing Christmas lunch and listening to the radio.

The BBC listed the royals attending the Sandringham service. There were 18 of them — if you included minor royals like “Fergie” (Sarah Ferguson, the Duchess of York).

That gave him his idea for a pack of royal playing cards. The court cards — aces, kings, queens and jacks — made 16; add the two jokers and there were 18.

So there were enough royals to illustrate a pack, substituting new portraits for the standard images.

“The royals, especially Fergie, did a pretty good job of making themselves look silly so it didn’t really need me but I thought I’d lend a hand,” he says.

“I asked my friend, the satirist and artist Willie Rushton, if he’d do 18 gentle cartoons (no rough stuff) and he was happy to assist. But I reckoned without the pomposity of courtiers.

“Firstly, Fergie’s private secretary got wind of what we were doing and complained that Willie’s picture of her grinning inanely while on one of her perpetual skiing holidays (with Budgie the Helicopter in the background) painted her in an ‘undignified’ light.

“I didn’t think Fergie was big on dignity but maybe it was a mistake to say so.”

He received a letter from the publisher of her Budgie children’s book, saying Budgie was copyright and threatening brimstone if it appeared on a card. So Budgie went.

Then a courtier acting for Princess Michael said that her being pictured with a sign reading “All major credit cards accepted” implied that she and her hubby were available for hire.

“That was exactly what Willie meant,” laughs Mr Bird.

All this dragged things out and then, just before publication, the Lord Chancellor put his oar in — or his secretary did — with a letter saying that “objection is bound to be raised to pictures of members of the royal family on playing cards”. The letter insised that he “discontinue the project”.

However, the clumsily written royal letter was gold dust and was quickly sent to the newspapers, which joyfully published the story of “The pack they tried to gag”.

Rushton did the circuit of TV stations and Mr Bird and his partner and brother Tony, who financed the enterprise, did the rounds of radio stations. The Lord Chancellor had ensured maximum publicity.

“I should have sent him some wine or something but he probably had access to the Queen’s cellar,” says Mr Bird.

The pack was launched at the Cartoon Gallery in Mayfair with humourist friends like Auberon Waugh and Barry Cryer present. The pack was even sold in Harrods, which then had a royal warrant.

Thereafter Bird Playing Cards prospered, or rather the number of packs proliferated.

“We are good at producing nice cards, but not at making money,” says Mr Bird. “The year’s profit usually gets blown on lunch.”

Since Willie Rushton’s Pack of Royals, all Bird’s packs have had every card illustrated on a chosen theme. A total 110 different packs have been published, from the tasteful to the tasteless, from Leonardo to lavatories.

“Some do well, some don’t, you can’t tell which are going to work,” says Mr Bird. “A pack on Muhammad Ali was a bummer, one on Banksy huge.”

A card in a pack of saucy seaside postcards by Donald McGill caused offence. It showed a pretty girl telling a waiter, “Take this jelly away, waiter. There are two things I like firm and one of them’s jelly!”

Mr Bird explains: “‘I was told I was a pornographer but if it was okay in Thirties England, it should be today. Anyway, decent people shouldn’t get the joke — my mother didn’t.”

Bird Playing Cards has sold about a million-and-a-half packs.

The biggest sellers have little in common — Churchill, Titanic and D-Day have all sold thousands. A pack on the German resistance to Hitler sold “about seven”.

Mr Bird says: “Dead artists out of copyright are my favourite — they don’t make trouble.”

The packs are printed in Vienna by Piatnik and he says: “Austrians are sensitive about their past and we have to airbrush swastikas out of all war posters.”

The most difficult agent the firm had to deal with was Elvis Presley’s.

Mr Bird recalls: “Elvis was dead but his estate, managed by his former wife Priscilla, threatened cancellation of contract if you even hinted in the text that Elvis sang a lot of muck at times, made crappy films, had a dodgy manager and liked the odd burger.”

He says that the trouble with collectible things is... collectors. “They are terrible pedants,” he explains. “I had a bloke phone from a German autobahn to say I’d spelt Maradona wrong in a footy pack.”

That vintage pack did well but a modern one wouldn’t work for copyright reasons: “I wrote to Manchester United suggesting a Man U pack and they replied with fearsome threats.”

Vintage Hollywood is a good source and stars like Marilyn Monroe and James Dean earn more dead than alive “such is the rapacity of their agents”.

Bird Playing Cards is an “inclusive” business and has done both a straight and a gay pack.

The latter was, says the founder, “disappointing, too tasteful perhaps”.

Packs on vintage luggage labels, lingerie and Fifties pin-ups appeal to connoisseurs of the recherché.

“Niche is what we do: toy cars, pub signs, the Beano, matchbox covers… but sometimes with a sure winner like gin or prosecco thrown in,” says Mr Bird.

The compnay has milked the royal connection. Royal Wedding — Kate and William’s — sold nicely but by the time Royal Brides (2011) and Royal Babies (2015) came along the “royal racket was satiated”.

Mr Bird says: “Big sellers are often jokey things but you have to be quick as bandwagons don’t hang around.

“My biggest mistake was to reject an idea from our marketing director Rob Butler (after Kate Middleton’s wedding) of a pack called Pippa’s Bottom, which was huge at the time. But I was too slow to grasp it and the bottom fell out of the market.”