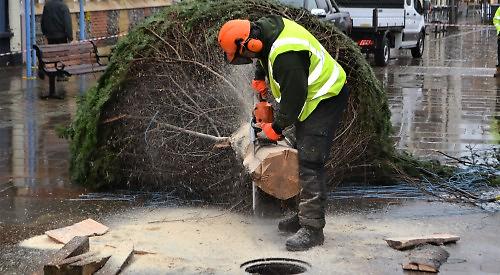 HENLEY’S Christmas tree has been installed in time for the Christmas Festival on Friday njght.

It was unloaded in Market Place using a miniature crane before members of the town council’s park services team trimmed down the base of the trunk with chainsaws.

They then lifted it again and lowered it into a hole in the pavement in Falaise Square, then trimmed the lower branches and secured it in place by hammering in wedges of wood.

The tree will be switched on at 7pm by Phoebe Carey, the winner of the Mayor’s Christmas card competition, and Betty Jones and Jessica Condon, the stars of the Kenton Theatre pantomime Sleeping Beauty.

Phoebe, six, who attends St Mary’s School in St Andrew’s Road, submitted the best design on the theme of “A Christmas feast in Henley”.

The festival starts at 4pm with the opening of Father Christmas’s grotto at the Regal Picturehouse cinema in Boroma Way. Every child who attends will get a free gift.

At 5pm there will be a children’s lantern parade led by the panto stars from the River & Rowing Museum in Mill Meadows to Friday Street. The children will then sing in Market Place at 5.30pm.

A performance by the Divas and Dudes Dance Academy will follow at 6pm, then there will be carol singing with Henley Youth Choir at 6.30pm.

The youth choir will take part in another carol session at 7.10pm along with the d:two choir and the Woodley Concert Band.

Shops will stay open late and there will be market stalls and traditional Victorian fairground rides.

Road closures will be in place from 3pm to 11pm on Bell Street, Duke Street, Friday Street and Market Place and from noon until 11pm on Hart Street.