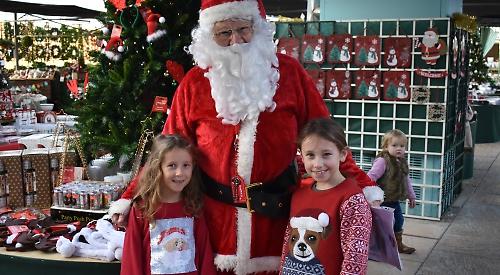 ALMOST 200 children met Father Christmas when he opened his grotto in Henley at the weekend.

The grotto at the Toad Hall garden centre, off Marlow Road, raises money for charity and was first created by Henley Lions Club more than a decade ago.

It was designed and built by Lynn Burgess, an assistant at the centre, with help from her colleagues. It features stuffed reindeer, polar bears and penguins.

Mrs Burgess officially opened the grotto by cutting a ribbon with Anna Murphy, of the First Days Children’s Charity, one of this year’s beneficiaries.

Then Father Christmas welcomed his first visitors, Olivia Greaves, four, and her two-year-old sister Isabella, from Stoke Row. The girls were given gifts of a tiara and face paints. Their mother Victoria said: “We come every year. The grotto is brilliant — they always make such an effort and it’s magical for the children.”

The grotto was originally based at the former Wyevale garden centre near Shiplake before moving to its current home when that closed in 2009.

Father Christmas, who bore an uncanny resemblance to Lion John Moore, was joined by helpers Audrey Devall and Joan Evans while Chris Adam took the part of Mother Christmas.

They handed out gifts to the children as they left the grotto.

Mr Moore said: “The grotto is unbelievable this year. It just gets better every year — Lynn does a wonderful job. We couldn’t believe the number of people who came just to see Santa. We had 89 people visit on Saturday and 108 on Sunday.

“The queues were quite long at times but we don’t just push the children through, we try to give them all some time.

“Toad Hall are so kind because they don’t charge for everything they do and they give over the space.”

Martyn Sheldrake, general manager of the garden centre, said: “Lynne spends about four to six weeks doing the grotto and it’s about 20 per cent bigger this year.

“It puts a little bit back into the local community. We appreciate what business we get throughout the year and everything is so commercialised now, it’s the one bit we still do for charity. Yes, it brings customers in but it’s for the enjoyment of the children really.”

The grotto will be open throughout December and Father Christmas will be there every weekend in the run-up to Christmas. It costs £7 per child and each visitor will receive a present.

Half of the proceeds go to the Lions, who then use it to make donations to local charities that support children and young people.

This year, as well as supporting First Days, which equips children with the essential items they need for their early years and at school, the grotto is also helping the Footsteps Foundation in Dorchester, which supports families of children with neurological disorders.