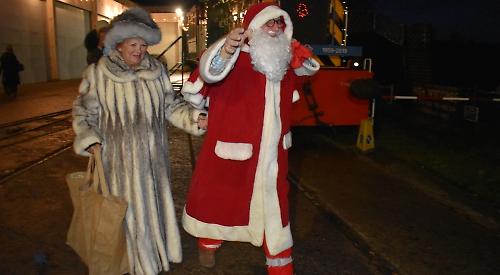 More than 200 people attended the evening event at Somersham station on the Fawley Hill estate, the home of Lady McAlpine.

The traditional nativity featured about 15 children from the village or nearby and the performance was held on the track and station platform built by the late Sir William McAlpine in 1960.

The child actors were ferried to the stage in several journeys aboard a coach named Judy after Lady McAlpine. It was attached to a
30-ton British Rail 03 class diesel shunter that belonged to Sir William, a railway enthusiast.

The engine pulled the coach towards the platform but stopped short to allow the children to disembark and walk along the line to the hay bale stage set up at the tunnel entrance.

The audience, which comprised both villagers and parents, watched the children from the edge of the platforms.

He also read a quick prayer at the end and thanked God for stopping the rain which hit the valley just before the play was about to start. A few minutes after the performance light rain began to fall again.

Mary, who was played by five-year-old Molly Swinglehurst, arrived on an excitable “donkey”, which was actually a black horse called Jasper from the Brackenhill Stud nearby.

The eight-year-old gelding was led by its trainer down the railway line towards the stage but was spooked and swivelled.

Molly had to be pulled off when the animal defecated and began stamping in frustration and Rev Southgate was lost for words.

The play continued as Jasper was led away. Joseph, played by Zak Khan, arrived in the engine a little later.

A star had been lit above the stage and a firework was set off to symbolise the birth of Jesus.

Other children dressed as kings, queens, angels and shepherds.

The crowd of spectators on the platforms sang carols including O Little Town of Bethlehem, Silent Night, While Shepherds Watched their Flock, Away in a Manger, We Three Kings and O Come, All Ye Faithful.

They were accompanied by pianist Suzannah Shaw and guitarist Graham Wheeler from the Valley Band.

After the play Rev Southgate asked everyone to sing We Wish You a Merry Christmas before the engine arrived at the end of the platform for a final time and Lady McAlpine disembarked with Father Christmas, who came bearing gifts for the children.

She carried a sack of gifts up to the stage where a snow machine had been set off and the pair sat on the bales and invited the audience and children to come and receive presents, which included wooden model aeroplanes, marbles and whistles. The spectators went into the station where they enjoyed mulled wine and mince pies.

Afterwards the children who performed were invited into Lady McAlpine’s home where they were allowed to pull apart and eat a larlarge gingerbread house that she had decorated.

Some of their parents and villagers also attended and were served champagne and refreshments.

The event raised £300, which will be split between the Fawley church and the Chiltern Centre in Henley, which provides support for young adults with a learning disability and their families.

The play was first held in 2004 and has taken place most years since then.

Lady McAlpine said: “It’s chaos but fun. I think everybody enjoys it and as far as I’m concerned every church group needs a nativity play.

“When you live in a village you just do whatever you can to help pull the village together.

“We are a very good, quite solid community but we have to do things together to stay together.”