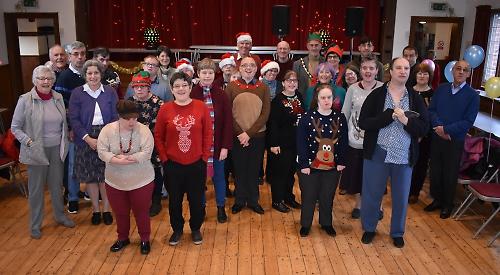 ABOUT 60 members of the South Oxfordshire Mencap Society attended a Christmas party at Harpsden village hall.

The event featured a disco, game of pass the parcel, tea and a visit from Father Christmas.

DJ Peter Roberts, who has provided the music at Elton John’s white tie and tiara charity ball for 28 years, played seasonal songs such as Last Christmas by Wham! He came with his daughter Sarah, 32, who has learning difficulties.

There was also a raffle with prizes including an opportunity to meet the animals at the Fawley Hill estate, the home of Lady McAlpine, afternoon tea at both the Chocolate Café and the Spice Merchant restaurant in Henley and tickets to the Regal Picturehouse cinema. Father Christmas gave members presents such as mugs and jewellery.

The party was also attended by Henley Mayor Ken Arlett and his wife Dorothy and Deputy Mayor David Eggleton who performed card tricks.

Paul Barrett, who chairs the society, said: “We all joined in the dancing, including the Mayor and Mayoress, who were very good.” He thanked Mr Roberts, saying: “He’s very supportive of all of our activities and does four discos for us during the year plus the Christmas party. He’s absolutely great and has all the equipment and is a real asset.”

Mr Barrett said there was a good selection of music. “The favourites for a lot of our folk are doing the hokey cokey and YMCA,” he added.