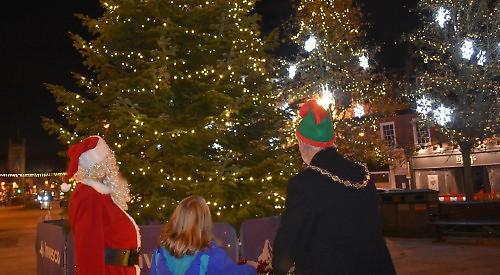 THE winner of the Mayor of Henley’s Christmas card competition helped switch on the lights on the town’s Christmas tree.

Anna Brandis, 10, took part in the ceremony in Falaise Square with Mayor Ken Arlett and Father Christmas, watched by her parents Matthew Brandis and Jenny Gadsden and brother Tom, 13.

She was given a countdown by her family before all three pressed a button to light up the 35ft Nordmann fir. The ceremony would usually take place at the annual Christmas festival, which had to be cancelled this year due to the coronavirus pandemic.

This was one of Anna’s prizes for winning the competition with her drawing of a “magical” Christmas featuring a Christmas tree with the baby Jesus on top, snow, gifts and a robin.

The picture will be printed as the Mayor’s official card by Higgs Group, publishers of the Henley Standard.

Anna, a pupil at Sacred Heart Primary School, also won a voucher and some chocolate.

Mrs Gadsden said: “It was lovely watching the lights be switched on.

“Anna enjoyed herself and was really excited beforehand.  Her brother also really enjoyed it and the lights look great. It would be really lovely to be able to come back next year when things are a little more normal.”  Cllr Arlett said: “It was great to see Market Place lit up.

“I was disappointed that the whole town wasn’t out to see the lights being switched on, especially for Anna, but I’m sure she enjoyed it and seeing Father Christmas.”

The tree was supplied by Greenfield Farm in Christmas Common and is sponsored by Invesco.