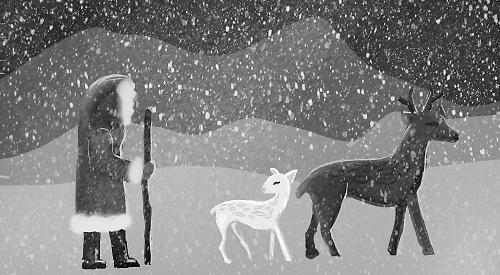 HEIDI dug her staff into the Norwegian snow. It was deeper here on the top of the hill and the wind was biting through her thick parka and woollen scarf.

This was open grassland in the summer. Now, on Christmas Eve, her flock of reindeer were huddled together and only their antlers moved as they nuzzled their faces lower into the warmth of the herd.

She had one reindeer missing, Tula, traditional in colour but she had produced a white calf. Heidi had named him Snowflake. He wouldn’t have a red nose or belong to Santa Claus. He was hers, precious, magical, so unique among the brown.

Heidi couldn’t go without finding them. She looked at the herd and saw they were calm, content. Common sense told her to drive the 30 deer down to the shelter of her father’s farm. He would expect that of her.

Loving thoughts for Snowflake were childish, yet that was what she felt. Fear gripped her as Snowflake would not survive this night, the temperature was lower than she had known in years.

She turned her back on the herd, stepped three paces and stopped. Leaving them could be risking a wolf attack.

Then she walked on again — she had to find Snowflake.

Heidi counted her steps across the blank canvas of snow, shielding her eyes against the wind, looking forward and sideways, searching for hoof indents, large and small.

Tula had birthed for three years and she was the size of a mature doe, so her antlers were strong to scoop away the snow to find lichen for herself and Snowflake.

Heidi looked to the sky where the moon was slipping away behind the blackness of cloud. The snow that had been white and reflective was dulled and robbed her of light. She had walked 50 steps; another 50 and she could get lost.

There was one place she could get to and still return to the herd — the outcrop of jagged rocks, Nord Peak. It was a gamble and foolish, her head said, but her heart told her go.

The darkness was immeasurable. Heidi had never been alone in the winter on the high hills and the vastness of the endless snow and the continuous howling wind swirling the loose flakes of snow into her face was painful and terrifying.

What if she were walking in a circle and not a straight line? The picture of a wandering sentimental fool filled her mind and stayed there.

At 100 steps her boots touched stone. She cupped her gloved hands around her mouth and shouted. “Tula, Tula, can you hear me?”

She shouted again but the wind was getting stronger and her words were thrown back across her shoulders.

The gradient was not steep, but her boots slipped on the ice-covered rock.

She found it helped to bend and claw with her hands to climb the rising slope. Her breath hung in the air for a second before being whipped away from view.

Then she heard a grunt. “Tula, is that you?” she called. Heidi straightened and balanced, wedging her feet between two large rocks, and unzipped her parka pocket to take out a torch but the beam was weak in the vast darkness.

“Tula, grunt again. Where are you?”

Now she saw movement and clambered forward, slipping in her haste to reach Tula lying beside Snowflake shielding him from the wind.

One of his hind legs was wedged in a cleft, his front legs spread as he balanced against the battering storm. Tula turned her head and grunted. “I’m here, Tula,” said Heidi, her voice breaking into a sob, “Snowflake, I’m here to take you home.”

She knelt, whispering, “Please don’t let it be broken.”

Then she eased the leg back. “Just another inch.”

Heidi lifted the calf into her arms, touching his leg. There was no shattered bone.

Tears filled her eyes and she prayed, “Thank you, Lord, for this Christmas blessing.”

The climb back over the rocks was more perilous with the snow now falling thicker and faster and the lashing wind tearing into her. Lightning flashed followed by roaring thunder.

Heidi hugged Snowflake closer and by the time she reached the flat land every element had grown fiercer. The snow was a white-out with the wind cutting like a blade followed by a deafening blast.

She sank into the snow beside Tula. Her heart raced and she waited. The snow fell, the wind roared, and then the storm moved on.

Heidi carried Snowflake. Each step was torture as her feet sank into the new snow layer, but she counted her steps and at 100 she stopped. There was no herd, not even trampled snow.

She was lost. Lost in a winter wonderland scattered with small villages and farms.

Tula had followed her obediently. Now she nuzzled Snowflake and walked away to the side, turned and grunted. The calf struggled and Heidi opened her arms and let him follow his mother.

All she had to do was follow Tula because she knew exactly where the herd was waiting.