Residents’ group delivers 120 festiver hampers to elderly and those shielding 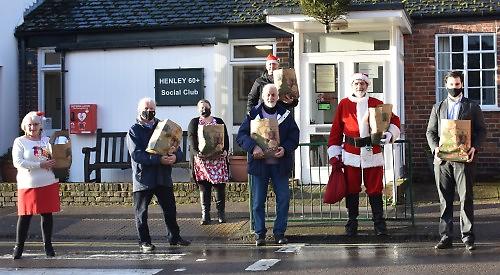 MORE than 100 Christmas hampers were delivered to residents of Henley who are shielding or elderly.

The initiative was organised by the Gainsborough Residents Association.

A total of 120 hampers were delivered. Half went to members of the Henley 60-Plus Social Club in Greys Road car park, who were unable to have their Christmas lunch this year due to the coronavirus restrictions. The other half went to older people who usually attend the association’s Christmas lunch at the Catherine Wheel in Hart Street, which was also cancelled.

The association used money from the £2,500 Emergency Assistance Grant it received from South Oxfordshire District Council.

Soha Housing contributed £500 and Waitrose in Bell Street donated £350 as well as supplying the goodies for the hampers, including chocolates, jam, cheese, biscuits and other treats.

Henley Deputy Mayor David Eggleton, who chairs the association, chose the food for the hampers and also had Christmas cards printed by Higgs Group, publisher of the Henley Standard, to wish everyone a safe and happy Christmas.

He said: “It was quite stressful at the beginning as it’s something new but we got through it.

“There were a few hiccups but we overcame them and the feedback from the people who received hampers shows that it was the right thing to do.”

Staff from Wilkins, the Henley removals, storage and shipping company, helped Cllr Eggleton put the hampers together in the company’s warehouse in Reading and then helped deliver them on Saturday.

John Miles, managing director of Wilkins, said: “The reason why we decided to help is because we felt that with all the covid restrictions and the lack of ability for the town council to hold the Christmas party, it was sad and I wanted to step up and put a positive spin on it. It’s enjoyable being able to give something back to the community.”

Paula Isaac, vice-chairman of the association, said: “We wanted to still do something for people, especially after such a particularly difficult year for many.

“As many people have been shielding and isolated from their usual support networks and families, we thought it would be nice to send a lovely Christmas hamper to residents to let them know we were still thinking of them and to give them a few little luxuries to enjoy for Christmas.”

Councillor Eggleton thanked all the sponsors, saying it wouldn’t have been possible without them.

He encouraged people to spare a thought for their neighbours over the holiday, especially if they are elderly.

“It’s not always about giving gifts, it’s about looking out for other people and their welfare,” added Cllr Eggleton.