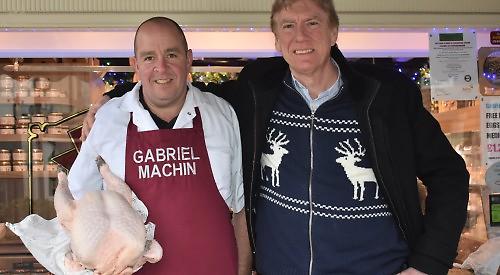 PETER SIRRELL is looking forward to celebrating Christmas with his extended family — and a free turkey for dinner.

He won the 6kg bird from Gabriel Machin, the award-winning butcher in Market Place, Henley, in the Henley Standard’s annual festive competition.

It comes with traditional trimmings including 24 chipolatas, 24 rashers of bacon, a 200g jar of goose fat and a 250g jar of cranberry sauce with a total value of £110.

Mr Sirrell, 57, lives with his wife Helen and their children Oliver, 25, and Sebastian, 22, in Orchard Coombe, Whitchurch Hill.

He said: “The turkey is ideal as we’ve got a family of about 15 coming — grandparents, sisters, brothers, the lot. It’ll be nice as we haven’t seen these people for more than two years due to the pandemic. It was only local gatherings in bubbles last year.

“My wife is a bit worried about how she will cook such a big turkey but we’re looking forward to it.”

He said: “I entered the competition about six or seven years ago and didn’t win but I love entering competitions in the Henley Standard because they’re good old-fashioned write-in rather than using email. When I worked at Heathrow Airport I once won a trip to Egypt. If a competition is not too complicated, I’ll enter it.”

Mr Sirrell added that Gabriel Machin was “the best butcher in the business”.

The butcher has been running since the late 19th century and sells game and fresh fish as well as meat.

Machin’s turkeys are so popular that people queue outside the shop to collect their bird each year.

The turkeys come from Starveall Farm in Upton, while Machin’s geese are from Peach Croft Farm in Abingdon.