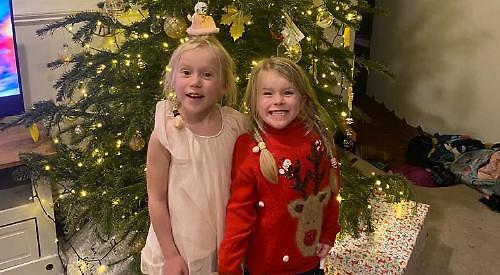 LIS RANSOM’S nine grandchildren were last together during the autumn half-term when they invaded Kew
Gardens and made an assault on Windsor Castle. Now she is crossing her fingers that they will all make it to Binfield Heath for Christmas.

IT’S December. Guernsey girls and their mum have recovered from covid. Only mildly ill but family isolations are overlapping — and Daddy still hasn’t caught it.

Will they be clear by Christmas when the whole family is coming here to Binfield Heath? Will their cousins down the road or in London go down with it at just the wrong moment?

The fourth wave is sweeping through Europe. Germany, Austria, Holland and Belgium are all in trouble, with low vaccine levels and anti-lockdown protests. UK figures still too high, so there could be trouble ahead. Déjà vu? Recall last Christmas.

THE news we feared: new variant “Omicron” has emerged in South Africa. More transmissible and not so responsive to vaccines. Top scientists on the case, immediate travel restrictions.

One case of Omicron in Belgium and a few in UK. Masks should be worn in shops and busy places and on public transport.

GUERNSEY families fear for their crossings in a couple of weeks. The little girls have already packed and the boys are busy making things: one draws, another cuts and glues, the third puts handles on. No one knows who they are for.

Local grandson moves on from dinosaurs to Pokémon, which we don’t understand at all. He creates a playing card specially for us. We’re apparently “old power”, highly valued — but still baffled.

DENTIST. Grandson asks how much the fairy gives for half a tooth lost.

PM reluctantly declares move to Plan B. People to work from home again if possible. Covid passports for nightclubs, large events, even outdoors. Masks everywhere in public. So far, so sensible.

Numbers limited so we can’t watch the children’s Christmas shows. Glad we saw granddaughter in panto last month but miss grandson starring as jack-in-the-box. Not sure which story.

Plan to put up tent for 20 lunch guests over two days — covid-safer plus will provide more space for gymnastics.

Puzzled by labels that read, “Keep away from children”. Impossible.

School fair outside in rain. Combination of hat, scarf, glasses, mask and brolly so I can’t see anything at all. Children don’t recognise me.

Book club black-tie evening do — masks optional but most wearing them; tricky to eat, drink and talk.

Omicron milder but much more infectious and will soon be dominant strain. Only boosted people likely to be safe and numbers of seriously ill by year end could collapse the NHS.

Feels as if we are back where we started nearly two years ago.

PM won’t be holding any parties this year: office bashes being cancelled everywhere.

HARD to get excited when
celebrations might be cancelled again. What exactly is Plan C? People cautious, everyone a little reluctant except Santa, who is scrambling up illuminated house walls to reach the stars, together with assorted reindeer, snowmen and elves. Amazing displays in the village, always bring a smile.

WE decorate village shop window with tree and parcels. Last year, we just managed it before lockdown.

Home to hear address by PM: national emergency, now at alert level 4. Omicron cases doubling every two to three days. Calls for booster mission unlike anything yet seen. The nation and NHS can do it, he says. Everything to play for now.

LONG queues for boosters throughout the land, some people waiting several hours.

Online booking for lateral flow tests crashes. I have trouble
getting a pack in pharmacy.

CLOSE friends in village have tested positive — it’s getting near to home.

We cancel next week’s planned theatre trip with children to
London to avoid public transport and crowded places. The capital is again suffering more than rural areas.

We are told by the experts to expect “staggering” figures, a tsunami, over next few days. Possibility of more regulations before Christmas. Just hope it’s not a repeat of last year.

Ask in supermarket about pheasants for next week. Unobtainable, the butcher says. They’re all in my garden, I tell him.

FRENCH by zoom again. News from France that we can’t go there anyway.

The Queen cancels her annual pre-Christmas lunch too.

Following regular deliveries of unidentified small parcels, a railway branch line has appeared in the sitting room under the tree. Husband has forgotten that nine children and two dogs are still expected.

Friend’s granddaughter tests positive — knocks out a family of four from her plans for Christmas lunch. Could happen to any of ours.

Netherlands to lock down for four weeks, riots against covid passes in Belgium, Germany bans travellers from UK.

CHRISTMAS week. We’re in with a chance for the big weekend. The marquee is up, heater comes tomorrow, lateral flow tests at the ready.

More dither from Downing Street, so ever hopeful, I do the bedrooms, wrap parcels, write endless last-minute shopping lists. Should be safe to pick up the turkey.

And there’s still one spray of roses in the garden for the table.