Win a £75 turkey from Gabriel Machin 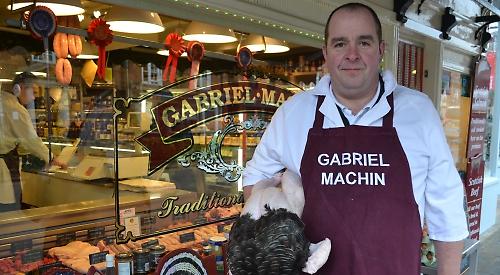 HERE’S your chance to win the biggest and best part of your Christmas dinner!

Once again, the Henley Standard has teamed up with some of the area’s top food retailers to bring you a variety of festive food treats to win.

This week’s prize is a glorious Christmas turkey from Henley butchers Gabriel Machin. The shop  in Market Place is thought to have been a butchers some 20 years prior to it being taken over by Mr Machin in 1881.

Machin’s has won awards for its home-made sausages and has its own smokehouse at the back of the shop. Since 2015 it has been owned by Barry Wagner who took over from Ian Blandford who had run the business for 14 years.

As well as selling meat products, the shop also has a game licence and stocks fresh fish.

All you have to do to be in with a chance of winning a turkey worth up to £75 is correctly answer the following question:

Q: In which year did Barry Wagner take over the butcher’s shop?

The winner will be the sender of the first correct entry to be selected at random after the closing date of Friday, December 16.

The prize is non-refundable and there is no cash alternative. The editor’s decision is final.

l Next week we will be giving away two Christmas hampers from Tesco and Waitrose worth £100 each, so don’t miss it!