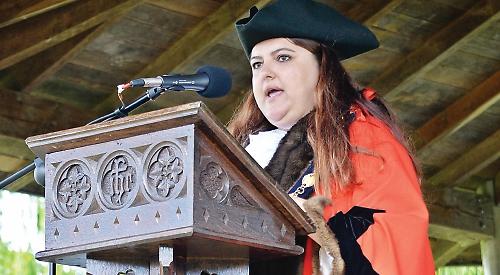 THE Mayor of Henley’s chaplain has called for an end to political “infighting” and “schoolyard arguments” at local and national level.

Addressing the congregation at Mayor Kellie Hinton’s civic service, which took place at the bandstand on Mill Meadows last Sunday, Rev Canon Martyn Griffiths called on politicians of all colours to put aside their differences and unite for the good of the people they serve.

Rev Griffiths said the nation was “no longer prepared” to put up with division among its representatives and those who failed to heed this could find themselves out of a job.

The annual service usually takes place at St Mary’s Church in Hart Street but was moved to the riverside beauty spot because Councillor Hinton wanted to make it more accessible.

Dozens of worshippers sat in rows of chairs and sang the hymns Morning Has Broken, Give Me Joy In My Heart and Lord Of The Dance. They were accompanied by a pianist and singers from St Mary’s choir.

Councillor Hinton, who was accompanied by her cadet, Harry Ellis, of the town’s Air Training Corps, gave a reading from Paul’s second letter to the Phillippians about compassion, humility and putting others first.

Rev Canon Martyn Griffiths, the rector of St Mary’s, then delivered a homily on the theme of “we, the people”, which are the opening words of the American Constitution.

His sermon refererred to the recent general election, to last year’s referendum on Britain’s membership of the European Union and also to the row that erupted when Cllr Hinton was made Mayor of Henley last month.

The role was expected to go to Conservative mayor-elect Will Hamilton but Cllr Hinton, of the opposing Henley Residents’ Group, was chosen after her party won two seats in a town council by-election the previous week.

Councillor Hillier, an independent Conservative, then abstained from voting at mayor-making on May 8, giving Cllr Hinton victory.

Rev Griffiths told the crowd: “I must admit to having a word with one of our town councillors when he was canvassing around Hart Street and slipped me his election manifesto, which he jokingly referred to as his ‘work of fiction’. He foolishly asked if he could count on my vote but I told him: ‘As the Mayor’s chaplain I have to remain politically neutral, in public at least, as it is the only way I can be equally rude to each and every one of you’.

“After the hoo-hah surrounding the Mayor’s election and the uncertainties aroused after the general election, there’s a great temptation for the political classes to knock the living daylights out of each other.

“But we, the people, are no longer prepared to put up with the level of in-fighting and schoolyard arguments that seem to dog the political life of this nation and pretty much every nation under the sun.

“Woe betide the politician who takes anything in this climate for granted. A sense of unity is more important in the world we now find ourselves in. We, the people, entrust you, the politicians, to humbly do your best in an age where selfish ambition has taken over from selfless service.”

The service concluded with the Lord’s Prayer and a recital of the National Anthem. Afterwards, visitors gathered under a marquee where Henley Town Council staff were serving drinks and cake.

Councillor Hinton said: “I thought it was a lovely morning. The weather played a huge part – I was hoping it wouldn’t rain and had expected it to be a bit grey but we were blessed with wonderful sunshine and the turnout was fantastic.

“Even the people who weren’t sitting among the congregation were playing on the grass and that was the whole point. I wanted to include everyone and spread the blessing.

“Everyone enjoyed the different setting and hopefully the hymns were easy to follow as I deliberately chose ones that most people would remember from school, which again comes back to making it more accessible.”