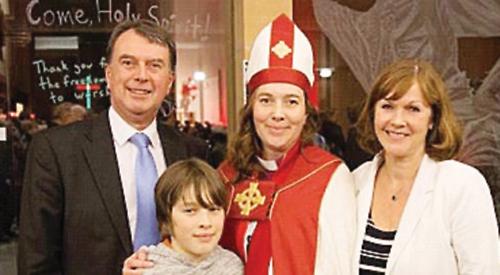 A MAN from Wargrave flew to New Zealand to watch his daughter be ordained as the country’s fourth female bishop.

Terry Grourk wanted to witness the ordination of his daughter Eleanor Sanderson, who moved to New Zealand 15 years ago after winning a scholarship through Rotary International that allowed her to study anywhere in the world.

After completing a masters’ degree in development economics, she stayed and later married her husband Tim and had two children, Zack, nine, and Joe, seven.

She was ordained as an Anglican minister in 2011.

Mr Grourk was among more than 900 people who attended the ordination at the Cathedral of St Paul in Wellington, the capital.

They included some from Fiji and Tonga, where special ceremonial mats had been woven by villagers for use in the service as a symbol of respect and honour.

The service included the act of consecration in which Dr Sanderson was encircled by the 13 bishops and archbishops. Mr Grourk presented her with a pectoral cross made from fossilised jet from Whitby, near where she was born.

Mr Grourk, an HR consultant who lives High Street with his wife Gill, said: “I was so proud to see Eleanor being held in such esteem by so many people. However, Gill and I then had to queue up to take our turn to speak to her.

“A few days later, with lots of tears, we said goodbye to come home. We will follow her progress with great interest.”

Dr Sanderson is the vicar of Eastbourne, a parish in Wellington, as well as being the diocesan canon theologian and chaplain of Wellesley College, a boys’ school in the parish.

She studied for a PhD in theology and has written several academic papers as well as being a fellow of the Virginia Theological Seminary and a research associate at the School of Religious Studies at Victoria University.

Dr Sanderson was selected to become assistant bishop of Wellington at a synod in March. She will support the current bishop Justin Duckworth.

Mr and Mrs Grourk are members of St Mary’s Church in Henley, where they were married three years ago.

Mrs Grourk lived in King’s Road before the couple moved to Wargrave. Mr Grourk previously lived in Croydon but brought up Dr Sanderson in Derbyshire.