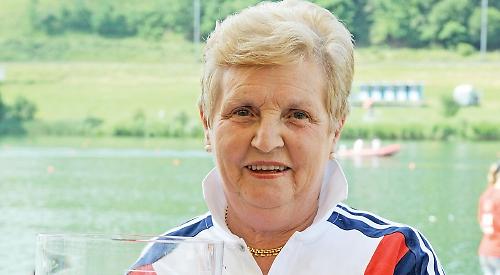 HUNDREDS of people attended a service in memory of Henley Royal Regatta’s first ever female steward.

Dame Di Ellis, who was elected to the committee in 1997 and helped found the Henley Women’s Regatta in 1988, was honoured at St Mary’s Church in Hart Street, Henley, on Thursday last week.

Scores of dignitaries attended the service, including Olympic and world rowing champions Sir Steve Redgrave, who is chairman of the regatta, and Dame Katherine Grainger.

Dame Di, who was also one of Leander Club’s first female members, died on May 18, aged 79.

She was a former international competitor with England and Great Britain and became GB team manager in 1988.

A year later she took over as chairman of the Amateur Rowing Association, which became British Rowing in 2009, and stayed in post until 2013.

She was made a dame in the Queen’s birthday honours in 2013 and in 2014 was appointed an honorary president of British Rowing.

Sir Steve told the congregation: “We were elected to the stewards at about the same time and I recall trying to put myself into her shoes as the first lady steward. It was difficult to imagine and the only way I could get close was recalling that, some years previously, tradesmen hadn’t been allowed to compete.

“I come from a building family so I found that quite odd but it’s no comparison to the statement that the stewards made in electing her.

“Had it been me, I might have been very aggressive and forceful but she conducted herself with dignity and care and made sure everyone she worked with felt involved.

“When she took over as chairman of British Rowing, we weren’t at our best internationally. In the medal table at the world championships, we had two silvers and three bronze.

“Di saw that improve almost year on year and while it wasn’t all down to her, she was a guiding light who provided the vision that was needed to adapt.”

Sir Steve had been reluctant to become British Rowing’s honorary president in 2000 but Dame Di encouraged him to accept.

He recalled: “I thought they were joking as I was still competing and had no interest in the politics of the sport. She took me aside to explain how I could help and made it so easy for me.

“Di was amazing — the sport survives on its volunteers and she was at the heart of that. We owe her so much and her family should be very proud.”

Dame Katherine, who won the British Rowing Medal of Honour for services to the sport last year, said she had asked Dame Di to present it.

She said: “We didn’t know if she would be able to but finally she said she could. She said. ‘remember, there will be no tears, only plenty of smiles’ and I will try to do the same today.

“Her humour stayed with her until the end and although she had plenty of titles and accomplishments to her name. she always had a glint in her eye.”

The pair first met when Dame Katherine was a student in the early Nineties.

She recalled: “I was a nobody but she took the time to listen to my ambitions, wild ideas and dreams and had enough wisdom to temper them slightly.

“She said I should aim for great results but it could take a while and I might not win gold at my first Olympics. In the end I didn’t achieve that until my fourth!

“I saw that time and time again in her. She listened to people who felt as though they were nothing as much as the various dignitaries she met. She made everyone feel important.

“She had an amazing vision for what women could achieve in the sport so it was highly appropriate that she was made chairman of British Rowing.

“I learned a lot from her leadership style. She spoke quietly but achieved a lot and her presence could fill the room despite her small stature.

“Her influence, style and panache brought many changes and her love, wisdom and compassion lives on in all of us.

Rev Canon Martyn Griffiths, the rector of Henley and Remenham, who conducted the service, said: “I must admit the first time I met Di I was scared stiff.

“She was bustling through the stewards’ enclosure on some urgent errand and there was I, the rookie rector of Henley, who had never even set foot in a rowing shell.

“She had that air about her which, to those who didn’t know her, reeked of the primary school headmistress. However, behind that was somebody generous, loving and professional.

“She was talented and grasped every opportunity offered to her – and sometimes, one gets the sense, even grabbed those which weren’t offered, although people were always grateful for her involvement.”

The congregation sang the hymns Guide Me, O Thou Great Redeemer, Dear Lord and Father Of Mankind, I Vow To Thee My Country and Jerusalem and Rev Griffiths gave a reading from the book of Revelation.

A retiring collection was taken for the Rowing Foundation, which helps young people or those with disabilities access the sport, and the British Red Cross. A reception was then held at the town hall.