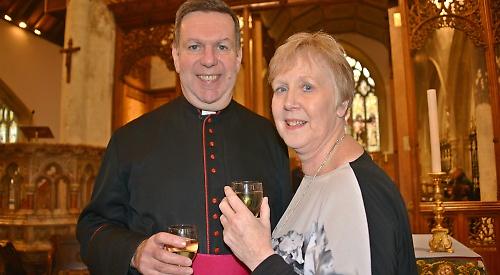 ST MARY’S Church in Henley was packed for the final service given by the outgoing rector of Henley with Remenham.

Sunday’s service was followed by a drinks reception prepared by parishioners of St Mary’s and St Nicholas’s Church in Remenham.

Guests included Henley Mayor Kellie Hinton and her daughter Hallie, seven, and Oxfordshire deputy lieutenant Felicity Rutland, from Remenham. Also present were Canon Griffiths’ wife Anne and representatives of the Henley Municipal Charities and the Henley Educational Trust, which he has supported.

He was presented with an framed photograph of himself and his wife at his farewell party held at Remenham parish hall last month, which was taken by the Henley Standard.

Councillor Hinton said: “It was a lovely occasion and it was typical of Father Martyn to make such a humourous speech. There was a huge congregation and he asked ‘where have you all been for the past 13 years?’

“The turnout shows just how highly he was valued by the Henley community and therefore how much he will be missed. He is a unique character and I have a great deal of respect for him.

“He was possibly the only person who could get away with having a dig at councillors in his speeches because people always took it with the humour he intended.”

Mrs Rutland said: “The fact that the church was full was a great testament to his involvement in the whole community. There were representatives from many walks of Henley life and I know that meant a lot to him.”

Canon Griffiths, 66, who had held the role since 2005, and his wife, are moving to Cholsey.