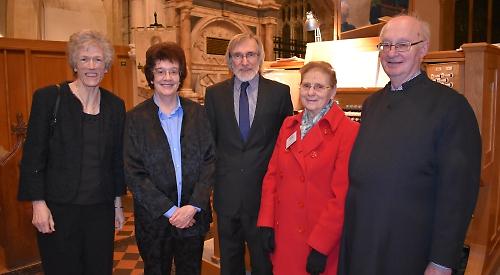 More than 250 people attended the evening performance at St Mary’s Church in Hart Street in aid of the Henley Stroke Club.

The concert was split into two sections with all the choirs performing individually before the interval and then combining for the second half.

As a collective they performed The Heavens are Telling by Haydn, Blest Pair of Sirens by Parry and Zadok the Priest by Handel. They were conducted by Frances Brewitt-Taylor, director of music at St John the Baptist Church in Kidmore End, and David Old was the organist.

Organiser Elizabeth Hodgkin, of Nicholas Road, Henley, said: “The eight choirs are very different and there was range of music from modern to old. It shows the range of what can be done with choral music. We like to support local charities if we can and any money not used by Henley Stroke Club goes to the Stroke Association to be used for research.”

The festival was started in 2009 by Mrs Hodgkin and David Butler, director of music at All Saints’, to showcase the choirs and raise money for charity. Since then it has raised more than £12,000 for good causes, including the Nomad youth and community project in Henley and Camp Mohawk in Wargrave.

Mrs Hodgkin added: “We charge £5 a ticket and everyone pays, even the choir members!”

Next year’s event will take place on Saturday, January 29.