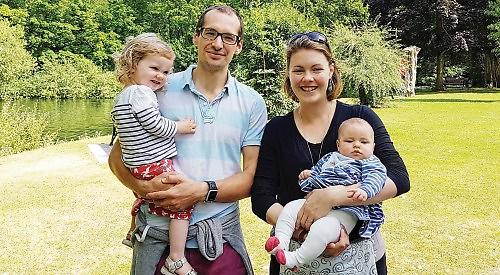 A HENLEY church has launched a new monthly service in a bid to attract more young people and families.

Trinity at 4, which is organised by Holy Trinity Church in Church Street, takes place at Christ Church United Reformed Church in Reading Road at 4pm on the last Sunday of every month.

It begins with 20 minutes of collective worship before the adults take part in half an hour of relaxed teaching. The children are divided into different age groups for a discussion about the Christian faith.

Everyone then comes back together for tea, biscuits and conversation. There is a crèche for the under-fours.

Trinity at 4 is in addition to the normal morning service, where attendance by families ois low partly because it clashes with children’s sports matches.

It will move into Holy Trinity once space is available and will operate as an independent charity.

It is led by Rev Sam Brewster and his wife Lucy, who are currently part of the ministry team at St Mary’s Church in Maidenhead. The couple, who have two young children, will move to Henley in the summer.

Rev Brewster, 32, said: “My term as a curate in Maidenhead is coming to an end so I was looking for a new project and was aware of the need in Henley because a lot of families from the town were coming over to us.

“We’re very excited but initially it will be a ‘soft launch’ because I still have my full-time job until June. We want people to come and see what it’s all about and hopefully we will be able to meet more frequently as it develops.

“We’ve had enough pledges of donations to see us easily through our first year and hope to raise enough for another year before our first six months are over. We’ll then look at ways of raising funds on an ongoing basis.

“We’re looking forward to moving to Henley as it’s a beautiful town and we have an opportunity to create something that really connects with families.”

About 70 adults and 30 children attended the first session last month.

Rev Brewster said: “We were very encouraged and had a fantastic time. When you’re starting something from scratch it takes a while for everyone to get to know each other but it was a promising start.

“The feedback has been pretty positive. There were a few logistical challenges in providing food for that many people but we’ve had lots of comments saying it was a warm and welcoming atmosphere, including some from people who aren’t regular churchgoers.

“There were quite a few people from the Sunday morning congregation who said it was lovely to see so many children because at the moment they don’t really see that.”

Michael Forsdike, lay minister at Holy Trinity, said: “Notwithstanding our best efforts, with one or two exceptions, we have few young people coming to our Sunday worship.

“Every once in a while we need a fresh look and a change of direction. Following discussions with other clergy and those involved with children’s work, a new initiative and vision has emerged.

“There will be difficulties and challenges but with prayer, determination, confidence and hard work they will all be overcome.”

Other Henley churches agree there is a need to adapt to attract more young people and families.

This takes place on the second Friday of every month and includes a service, a sit-down meal and arts and crafts workshops which explore the Christian message.

Rev Glyn Millington, minister at Christ Church, said: “Attendance can vary dramatically but it’s usually between 25 and 50 people per month, which is a good number.

“It has achieved what we were aiming for and initiatives like this or Trinity at 4 are good ways to welcome people from that generation.

“The problem you encounter when working with families and children is that you’re competing with everything else that happens on a Sunday morning.

“I think it’s fair to say most churches have had to work around that in some way.

“You have to adapt because that’s just how the world works. Nothing else used to happen on a Sunday morning — it would all be as dead as a dodo and there was no competition, which is definitely no longer the case.”

Henley Baptist Church in Upper Market Place hosts small groups in the middle of the week, including the “Me Too at d:two” sessions for parents and children and groups aimed at women and young adults.

It also regularly hosts the Alpha course, a series of weekday evening sessions for newcomers to Christianity, and runs community courses in money management, job hunting and the Recovery Café outreach service for those struggling with addiction.

Pastor Roger Cole said: “We try to make our services as warm and friendly as possible so that families enjoy taking part.

“There’s a lot happening on Sundays like rugby or hockey so families have to make that choice for themselves but there are other things they can be involved with.

“We’ve considered an afternoon service such as Trinity at 4 but in our experience these things drift back to a morning slot once they get a sizeable congregation as it’s what most people seem to want.

“Another possibility could be starting our Sunday services at 10am so that they are finished by midday and people don’t feel as though it’s eating into their afternoons.”

• The next Trinity at 4 session will be on Sunday, February 25 at 4pm. For more information, visit
www.trinityatfour.org.uk