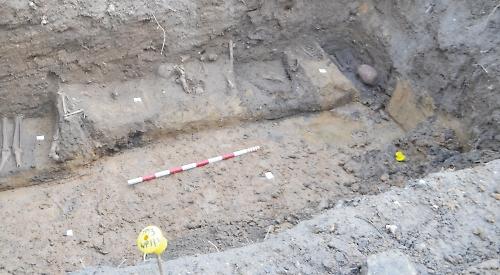 HUMAN bones believed to be from the Middle Ages have been discovered during the construction of a new church annexe in Wargrave.

The skeleton was one of around 90 uncovered in the churchyard at St Mary’s Church, off Station Road, as the ground was being prepared for the new £400,000 building.

Work started in January but had to be called to a halt on the first day when remains were discovered about a metre down.

A team of archaeologists was called in to exhume, clean and catalogue the bones before work to install the foundations for the annexe could restart.

The skeletons cannot be removed from the site under the Diocese of Oxford rules, so they are being cleaned in a shed in the church grounds and then moved to a room inside the church to be examined.

Lead archaeologist Dr Stephanie Duensing, of John Moore Heritage, said most of the remains appeared to be from the Victorian period but one could be from the Middle Ages, which stretched from the 5th century to the 15th.

She said: “Along with the Victorian and 18th century burials, there are some that predate them significantly. One is a shroud burial, which indicates it is medieval.

“We can see many intercutting burials which cut through to the burial plot next to them. We have around 90 plots which are not necessarily full and some have long since been separated.

“Diggers uncovered the bones on the first day. The first plot was 1.1m down, which is actually quite deep.

“There’s quite a lot of fill over the top which you would think is standard but a lot of churches would have quite shallow burials because the churchyard changes so much.

“We excavate them all and meticulously clean the remains but we can’t take them off site so we have a lovely shed where we wash them before passing for analysis. There is also some well-preserved wood from coffins which helps give us a date.”

Dr Ceri Boston, a bone specialist who is working through all the skeletons, said the remains allowed her to build up a picture of the type of people who used to live in Wargrave.

She said: “I’ve found evidence of scurvy, which was probably seasonal, and syphilis, which was common from the 17th to 19th centuries. There’s a lot of evidence that most of these people were undertaking strenuous labour and there’s a lot of arthritis.

“What I’m finding is in keeping with what we’d expect from the coffins. Most are among the poorer of the parish, labourers and servants.

“Some of the skeletons are just a hand or a foot but some are full. One had all the hallmarks of a bare-knuckle boxer or streetfighter as his nose was broken and he had quite a few rib fractures.

“I did my PhD on 18th century navy sailors and this chap had the unusual fractures to his toes that I saw in great number. It’s possible he was a sailor as they had people press-ganging all over the country at this time. They used to round up trouble-makers and people in jail and shove them off to the navy.

“There are also quite a lot of pretty bad teeth in the later people!”

Dr Boston said the skeletons were unusually well preserved, although much of the information also came from the types of coffin found nearby.

She said: “Some of the early ones we are roughly dating on the coffins. In the medieval era most were shroud burials but from the Tudor period people started to be buried in coffins. There are some quite ornate handles.”

Once the skeletons have been analysed, they will be reinterred in the churchyard.

Dr Boston said: “The diocese dictates the conditions of the excavation and that’s standard because these are residents of Wargrave and should be buried in the village.

“We have to disturb the dead sometimes for the needs of the living but we try to do it with respect and consideration.”