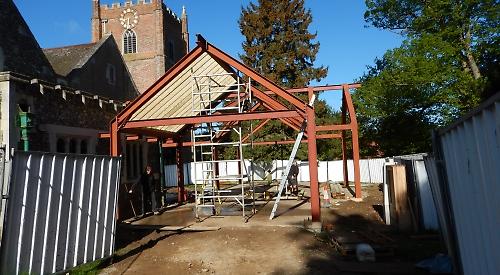 THE outer shell of a new £400,000 annexe at St Mary’s Church in Wargrave has been completed.

Roof timbers will now be installed, while wall panels are being put together off-site and brought in once the roof is in place.

The new building will then be available for “rudimentary” functions such as a Sunday school and for full use by the community by Christmas.

Work has also begun to repair the grass areas near the new building which had been damaged by the work.

Peter Mayes, a member of the parochial church council, said: “Progress with construction has accelerated in recent weeks with completion of the steel framework and commencement of work on the roof timbers. Good weather offers the prospects of completing the first stage in good time.

“With the major heavy components in place the protective trackway on Mill Green has been removed.

“The first stage in reinstating the grass has been to rotovate the whole area prior to importing best grade soil that will bolster germination.

“We keep our fingers crossed that the weather provides gentle rain once the seed is sown to prompt speedy growth during the early weeks of summer.”

The annexe will be called the St Mary’s Church Centre and will contain two meeting rooms, a café and toilets as well giving access to the church via the north porch.

It will provide a meeting place for community groups such as Mill Green Women’s Institute, which currently uses the nearby Hannen Room, and increase capacity for church functions.

The annexe is the latest stage of the 21st Century Project to modernise the church. The entire project will cost more than £600,000, which has been raised via collections, events and grant applications over the last five years.

Just £50,000 is now needed, which the church council aims to complete by June.

Work on the new building started in January but had to be called to a halt on the first day when human bones believed to be from the Middle Ages were discovered about a metre down. The remains were part of about 90 skeletons found in the area of the churchyard where the annexe will stand.

They were exhumed, cleaned and catalogued and were later reinterred elsewhere in the churchyard.