Lay minister retires after 60 years of service to church 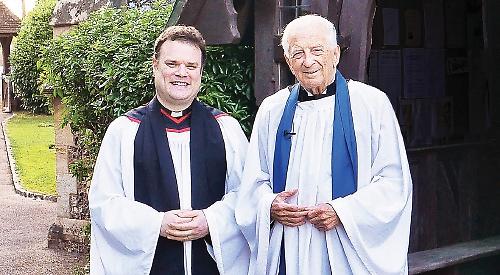 A LAY minister has retired after 60 years of service to the church.

Morris Clegg, 88, took part in a special evensong at All Saints’ Church in Church Lane, Peppard, on Sunday to mark the occasion.

He became a licensed lay minister, also known as a lay reader, in June 1958 in his hometown of Rainhill, near Liverpool.

He had to undergo three months’ training, which was overseen by his vicar.

Mr Clegg, of Butlers Yard, Peppard, said: “When I started I was just a youngster.

“I had realised before then that we didn’t just live by bread alone. I sensed we were more than flesh and blood, which was something I had been clear about for quite a long time.”

The voluntary role allows him to lead services, teach and carry out pastoral work when needed.

Mr Clegg spent most of his life in the North-West before he and his wife Judith, who died six years ago, moved to Peppard a decade ago and he made his services available.

He said: “All Saints’ Church is only about a mile away so we started worshipping there and the priest at the time was Barry Allson. I made it known to him I was licensed, so I carried on doing it.”

Mr Clegg was in the merchant navy before setting up his own laundry business in the North-West. He later started a property development business as well.

He sold both in 1983 but continued to work by helping banks to rescue struggling businesses.

Mr Clegg helped to set up a call centre for the Liverpool branch of the Samaritans, the first outside London. He said: “It was quite a steep learning curve but I got to help all sorts of men and women.

“I heard some incredible stories about how people had got their lives wrong. I don’t know if I was any use to anyone but I did learn a lot.”

After moving to Gawsworth, near Macclesfield in 1983, he hosted a monthly study group at his home, an old rectory built in 1470.

He served on the Bishop of Chester’s council, which made the decisions on how the diocese was run. He also stood in for the rector of Gawsworth when he was unwell and carried out several baptisms.

Mr Clegg said: “The commercial world can be very demanding with its huge emphasis on things material, so readership proved a very helpful counterbalance, a continual reminder that there are values which reach far beyond the things of earth.”

He said he had decided to retire due to his age.

“I think 88 is a reasonable and sufficiently advanced age and 60 years seemed to be a nice round number,” he said.

“I think my time as a reader was one more or less served in the background. It’s a low office. It’s the lowest form of ecclesiastical life.”

Rev James Stickings, the rector of Kidmore End, Sonning Common and Peppard, said: “Morris gave a very moving sermon and it was fantastic to welcome back the previous rector Graham Foulis-Brown.

“We know it is not goodbye as Morris will continue to worship with us and we will still have the benefit of his wit and wisdom.

“We are so grateful for what he has given to the church over the years. He was a big help to me when I moved into the area and had to get to know the parish.

“He is steady, sensible and wise.”