The church’s challenge is appealing to children 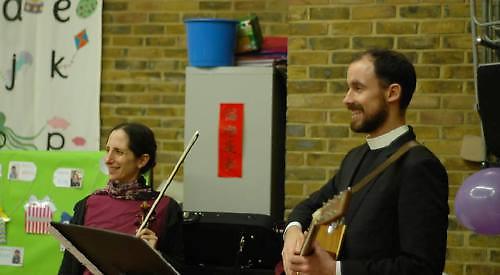 THE new rector of Henley says the church needs to offer more for children and families.

Rev Jeremy Tayler will take over next month from Rev Canon Martyn Griffiths, who retired in January after 13 years in the role.

The father-of-two is currently assistant curate at St John’s Wood Church in the Diocese of London.

He will serve the united benefice of Henley with Remenham, which has St Mary’s Church in the former and St Nicholas’ Church in the
latter.

Mr Tayler, 39, said he was looking forward to starting work, adding: “I’m really excited about it but I’m also quite conscious of the responsibility.”

He will be joined by his Finnish wife Maura, 42, who is personal assistant to the Archdeacon of Hampstead, and their daughters Blanche, nine, and Ginevra, eight.

Mr Tayler said: “To be perfectly honest, the thing that got me interested in the role was my wife who saw the advert before I did. Speaking generally, all the best ideas come from her!

“I was looking for jobs in London and hadn’t really looked further afield but I’m not a Londoner really — I’ve lived here all my adult life but I didn’t grow up here.

“When I read the advert I felt there was something about it that really seemed to fit. It just seemed to be a really good match in terms of what I could offer and what the parish was looking for.

“As a parent, you want a nice environment for your children to grow up in and I felt very confident they would have that in Henley.

“Henley was as lovely as I’d imagined it to be. It’s sort of an old English town and it’s beautiful and the river is wonderful.

“St Mary’s is a very beautiful church and people were very pleasant and friendly and that was quite important.

“The funny thing is that when in London I cycle, that’s how I get around. I came up with my bike on the train because I thought it would be quite nice to have a jaunt and I cycled up to Remenham.

“I have to say I felt more nervous on my bike on the country lanes than I do in London traffic! You turn a corner and suddenly there’s a tractor or a big van.

“In Remenham the church is fantastic and it’s really lovely along the river. It’s a beautiful place.

“Of the two aspects of the job, I think Remenham is the greatest challenge because it’s not like a town centre. You have got a few little settlements which comprise the parish of Remenham but there isn’t a hub whereas the Henley parish church is bang in the centre of town.

“I think there’s an interesting question of where does growth come from? How do we serve the full spectrum of the population of the parish?

“London is quite anonymous in a lot of respects. Most people in St John’s Wood don’t even know me. I try to be present in the parish but you don’t have that sense of being rector of a place in quite the same way as it will feel in Henley. In Henley and Remenham there will be no hiding place!”

Mr Tayler was born in Lincolnshire and brought up in Bristol before studying international relations and history at the London School of Economics.

He met his wife at university, where she was studying at what was then the School of Slavonic and Eastern European Studies.

After graduating, he managed one of the UK’s first internet cafés in the West End.

He then worked in research administration, beginning at the Centre for Economic Policy Research and later for other organisations including Marie Curie Cancer Care.

Mr Tayler recalled: “I looked after the funding, grant applications, the budgets, keeping the research to programme and reporting to the funding body.”

He also studied for a Masters degree in history and politics from Birkbeck, University of London.

He left work in 2010 as he was not enjoying it as much as his new family.

“I realised I wasn’t getting a lot of satisfaction from moving figures around a spreadsheet and decided to do something else.”

The family decided to leave their small flat in Fitzrovia and move to his wife’s native Finland, where they spent a year.

Mr Tayler, who had begun to consider becoming a priest, worked part-time teaching religious studies at a European school in Helsinki and also worked in an English language school for three to six-year-olds.

He described this as a “fabulous” experience but added: “Once we got into the winter my wife really couldn’t handle the weather, having lived in the UK, so we came back.”

Back in London, Mr Tayler decided to pursue a career in the priesthood.

He said: “I thought it would be a daunting responsibility and level of commitment but I knew at that point I could never go back to what I did before. It was a question of what I was going to do.

“As a child, I grew up in a religious household, which I lost in my late teens, but gradually slipped back into it through my early
twenties.

“By my late twenties/early thirties, I was very committed again and active in my church in London.

“When we got back from Finland in the summer of 2011 that was when I really started to think seriously about the priesthood.”

He went to see the vicar at his church, All Saints’ in Margaret Street, Fitzrovia, who encouraged him to pursue the move.

He then spent two years looking after his children while waiting to see if the Church of England would accept him.

Mr Tayler said: “It was wonderful but it was also the hardest I’ve ever worked!

“I was living in Muswell Hill, which is a lovely place to be raising a family and I was pretty much the only full-time dad.

“I got involved in local toddler groups because I play guitar so I did lots of volunteer stuff.

“It was hard work and I learned something about the joys and difficulties of being full-time parents. It can be a bit isolating.

“Two-year-olds are wonderful but there are some conversations you can’t have with them clearly, so the social side — the toddler groups and places and people you meet in the same situation — are really important for you and your children. As a priest, I really value that side of the work.”

After being accepted by the church, he trained for the priesthood at Westcott House, Cambridge, before taking up his current role in 2015.

He said: “I wonder why I ever thought I could do anything else. What I do now seems very natural to me and right.

“I learned a good deal along the way about myself and the world in general and people and different fields of work. There was a switch at some point from that genuine sense of having lost the energy to fight it off and it very quickly turned into a strong desire once I had the conversation with my vicar.

“There were certain conversations with people — with friends having a tough time — that made me think ‘there’s so much pain out there and if I can play a part in helping people through that, if I can bring God’s love to people in dark places, that’s really something I want to do’.

“The variety is fantastic — you meet lots of different people and no two days are the same.

“I love celebrating mass. Worshipping God is really important to me and it orientates the rest of my life. I enjoy preaching. It’s a position of great privilege in a way to have people listen to you for 10 minutes and you can say whatever you’re moved to say.

“I love the pastoral side of it very much. People share things with you as a priest that they wouldn’t otherwise and that’s sometimes very difficult things and sometimes very wonderful things or both at the same time.

“It’s not about me in the end, it’s about Jesus. It’s about the love of God and how people can see that, feel that and experience that.”

Mr Tayler will not rush to make changes in his new benefice but rather is looking forward to learning about it.

He said: “I won’t be looking at radical upheaval in the first 24 hours — that’s not my style.

“The people who are already there know the community, know the place, know the history of the church and they will have a lot to teach me.

“If you want to make things grow and change things you need to bring people with you. You need to listen to them and have them involved.

“We will be looking at what we can offer children and families. I think a lot of churches today find it increasingly challenging to attract families, especially in what you would call more middle class areas, where you’re competing.

“Churches are suddenly finding themselves not being the only player in town in terms of children’s activities so there’s a real challenge there. It not just Henley, it’s everywhere.