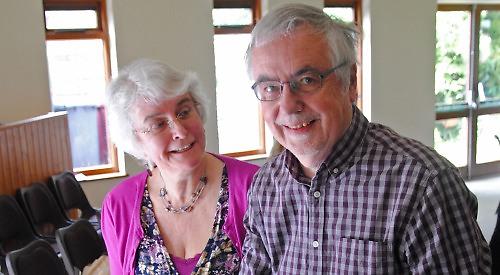 A COUPLE have stepped down after giving 35 years’ service at a church in Caversham.

A special service was held at Grace Church in Peppard Road to mark Derek Medd stepping down as an elder.

He and his wife Linda were described as “the caring heart of this church” and praised for continually helping people through difficult times.

The couple have run a Sunday school, a Bible study group for teenagers, a house group and children’s holiday clubs.

With two children of their own, they would spend Sundays attending the church service in the morning, running the Sunday school in the afternoon, going to the evening service at 6.30pm and afterwards hosting the 16-plus Bible study. Mr Medd also had a hand in identifying six new pastors, including Keith Saynor, who was appointed last year.

Dave Steed, also a church elder, thanked the Medds for the time and care they gave to people.

He said: “At times of anyone’s distress, illness or redundancy, Derek and Linda have always been there at the end of the phone.”

Mr Medd said that being a church elder meant going through the personal joys and heartaches of every person in the congregation, adding: “If you yourself feel down, it is still important to raise others up.”

The couple will now be part of a new six-strong pastoral care team and Mrs Meed will continue to play the piano at church services, something she first did at the age of 12.

Grace Church is part of the Newfrontiers International worldwide group of churches.

ARTIST Mark Draisey is to hold a sale of ... [more]