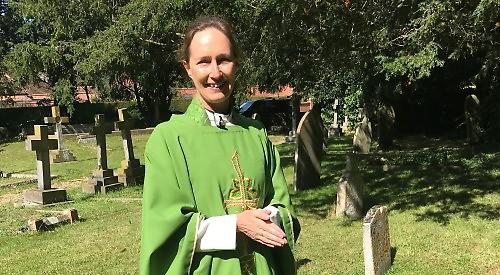 REVEREND Sarah Nesbitt has made history by becoming the first woman priest in more than 900 years to celebrate holy communion in Remenham.

She is believed to be the first female member of clergy to do so since the first rector of Remenham was recorded in 1076.

Rev Nesbitt was standing in for Rev Jeremy Tayler, the rector of Henley with Remenham, on Sunday, September 8.

He was conducting the patronal festival at St Mary’s Church in Henley.

She is currently assistant curate in the united benefice of Shiplake, Dunsden and Harpsden and said this year marked 25 years of women’s ordination to the priesthood in the Church of England.

“It’s a real privilege and a really special thing to do when it's the first time it’s been done.

“I was made to feel very welcome.”

Rev Nesbitt, who lives in Crowmarsh Gifford, added: “I look forward to the day when the word priest is ungendered. At the moment we say “priest” and we say “woman priest.”

Rev Tayler said he was pleased the church had taken the step. He explained: “It’s very common in the church that we need to find cover for one reason or another.

“In either church there has never been a woman priest. We felt they were ready for that step and Sarah was able to step in and lend a hand and by all accounts it went very well.”

Rev Tayler, who took over a year ago, added: “When I was appointed it was one of the things that came up. People were interested in my stance and I’ve always been entirely supportive of women’s ordination so people knew that when I was appointed to the job.

“It’s interesting because in a general way of things I’m a fairly traditionally minded person and I also understand that for some people it’s very difficult, but from my point of view the Church of England has made the right call on this.

“I’ve had some positive feedback and I think some people are extremely pleased it happened.”

He added: “It just means when I go on holiday it makes it a bit easier if i’m not only looking for male clergy, so it won’t be the last time certainly.”

Rev Nesbitt was ordained deacon in June 2018 and ordained priest in June this year. She trained on the Oxford Ministry Course at Ripon College, Cuddesdon.