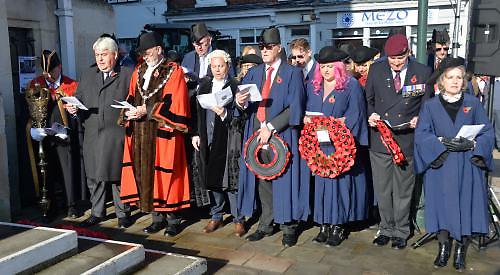 The crowd assembled outside the town hall in Market Place for the annual parade and ceremony on a clear morning.

Some of the spectators arrived about 45 minutes early in order to get a good view. They chatted while they waited and members of the Royal British Legion sold poppies.

The parade, which was marshalled by Lieutenant Colonel Paul Smyth, of the Royal Regiment of Fusiliers, began with five members of the town’s sea cadets marching from Greys Road car park into the square and forming a guard of honour in front of the town hall.

They were followed by air, army and Royal Marine cadets, veterans, members of the Henley and Peppard branch of the Royal British Legion and civic dignitaries.

They formed a semi-circle around the town hall, with the crowd behind them.

At 10.45am two helicopters, a Chinook and Puma, from RAF Benson performed a fly-past. People looked up as the aircraft roared overhead.

Then Henley’s town, district and county councillors were led from the town hall by town sergeant James Churchill-Coleman and lined up by the steps.

They were joined by Bernard Taylor, the deputy lieutenant of Oxfordshire, and Carlo Sisi, a retired paratrooper.

Rev Jeremy Tayler, the rector of Henley, led the service from the town hall steps.

He said: “My brothers and sisters, today we gather, as we do each year, to pray for peace in the world God made and peace for which so many have already laid down their lives and for which so many continue to die, day by day.

“And we remember them before God with grief and pride and thanksgiving.

“We pray for all who suffer still because of war and terrorism and we ask for God’s help and blessing for ourselves. That we may do his will and that the whole world may acknowledge him as lord and king.

“So now let us remember before God our Father and commend to his love and sure keeping, the souls of those who have died for their country in war, those whom we knew and those whose memory we treasure and all who have lived and died through the ages in the service of their fellow men and women.”

Mr Sisi then read the Ode to Remembrance from Laurence Binyon’s poem For the Fallen.

It is usually read by Brigadier Malcolm Page, patron of the Henley and Peppard branch of the Royal British Legion, but he was unable to attend due to illness.

Bugler Gregor Spowart, a member of Woodley Concert Band, sounded the Last Post as the standards were lowered and senior officers saluted.

This was followed by a two-minute silence during which some of the spectators bowed their heads as a sign of respect.

The Reveille was sounded to mark the end of the silence and Mr Sisi then read the Kohima Epitaph.

Rev Tayler led the Eternal Rest Prayer before the congregation sang Jerusalem, accompanied by the concert band who were in a marquee in Falaise Square.

Town clerk Sheridan Jacklin-Edward then read Bible verses from the book of Micah.

Councillor Arlett said: “Twenty-eight years ago today, I stood here as Mayor to address Remembrance Day. Twenty-eight years later, it is very encouraging to see so many of you here this morning, not just to remember the fallen, but also for the soldiers that did return from such dreadful wars.

“We must never forget those men and women that fought, not just for our country, but for other peaceful countries throughout the world.

“In one way or another, everyone gathered here today either had a relative or knew of someone that fought in either the 1914-18 or 1939-45 world wars.

“The tablets of stone either side of the town hall pay tribute to the men that sacrificed their lives for us.

“We should also recognise the soldiers that returned from both world wars and the suffering they have had to carry with them.

“Being Henley born and bred myself, over the years I have spoken to a number of local soldiers that returned from the Second World War. I spoke to a few that saw two of my uncles killed on the outskirts of a small town named Tourney in Belgium.

“Gradually, all the old soldiers are passing on but we must never forget them. There is still one old soldier that I know who lives in Henley and his name is Dick Charlton.

“Dick lives in Luker Avenue and was a member of the Oxon and Bucks 4th Battalion. He will be 100 years old next June. He was awarded the Henley town medal last year. This was not just for himself but for all his comrades who fought in the Second World War.

“Dick was 18 years old when he went to war. He tells a wonderful story of playing football with my uncle Reg for Henley Town Football Club in 1937. He can almost remember the whole 90 minutes of the game. Unfortunately, my uncle Reg never returned from the Second World War.

“Dick also tells some horrendous stories about what he went through and he has asked himself many times how he managed to survive when others fell by his side. It’s a job to know if Dick was the lucky one or the unlucky one. Dick, unfortunately, could not attend today.

“Twenty-eight years ago, my hope was that conflicts would stop. This was in the era of the Gulf War. Unfortunately, there always seems to be conflicts across the world for one reason or another.

“In 2018 there were an estimated 13.6 million people displaced from their homes due to war or conflicts. World leaders need to address these atrocities and also the fanatics and dictators that cause them.

“Today is a day of remembrance, a day to remember the fallen and also the suffering of their families.

“The time to celebrate will be on Friday, May 8 next year, when we can all celebrate the 75th anniversary of the end of the Second World War and victory in Europe.

“On that day, I am sure the town council, with others, will put on a very special event to celebrate. I hope you will be able to attend.

“A special mention to RAF Benson for the Puma and Chinook fly-past and an apology from Brig Malcolm Page. Unfortunately, at the age of 93, Malcolm has been confined to barracks today but sends his best wishes. Thank you all once again for attending.”

The crowd applauded as the Mayor rejoined his fellow councillors.

Rev Tayler then invited the congregation to sing I Vow to Thee, My Country before he delivered the Act of Commitment and The Lord’s Prayer.

The parade’s officers then saluted during a rendition of the National Anthem before the final blessing.

Wreaths were then laid on the town hall steps.

Mr Taylor was the first to place one and was followed by the Mayor, who touched the war memorial as a sign of respect, Councillors Gawrysiak and Hinton and Mr Sisi on behalf of the Royal British Legion.

John Howell, the Conservative Party candidate for Henley in the general election, also laid a wreath when members of the public were invited to the steps.

Afterwards the parade marched around Falaise Square with the Legion’s standard at its head.

As it passed the town hall, officers saluted the war memorial and commanded the cadets to turn their eyes right. The crowd applauded and cheered.