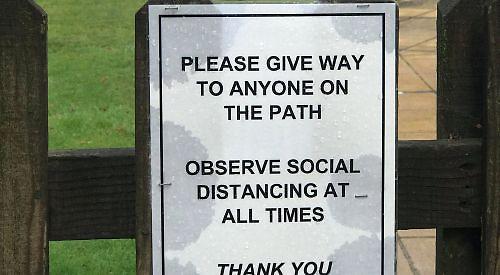 A PRIEST says her parishioners are missing normal church services which have been downsized due to the coronavirus pandemic.

Rev Sheila Walker says the restrictions designed to help halt the spread of the covid-19 are putting extra pressure on her.

She is currently responsible for the three churches in the benefice of Rotherfield Peppard, Kidmore End amd Sonning Common.

She is the associate priest but the rector, Rev James Stickings, is currently ill and off work.

During the crisis, she is giving a Sunday service once every three weeks at one of the churches, Christ the King Church in Sedgewell Road, Sonning Common, All Saints’ Church in Church Lane, Peppard, and St John the Baptist Church in Tokers Green Lane, Kidmore End.

Rev Walker said: “In one way it’s easier as I’m only doing one service on a Sunday when normally I would do around two or three, so it’s not a pressure. But it is a pressure dealing with all the extra regulations we have to follow.”

Under the government guidelines, no more than 16 people are allowed to attend a service and they must all wear masks and observe the 2m social distancing rule. No singing is allowed.

All churches have also had to scrap social gatherings, such as lunches and coffee mornings, after services.

Rev Walker said: “We set people up in the hall as well as the church and keep the divider between the two open.

“We have about 20 people on a Sunday, with seven or eight people sat in the hall and the rest in the church. That is the same with all three churches.

“The others have pews so they are marked to show where people can sit and we have stewards on duty to direct people.

“We collect names for track and trace and we also have the QR code if people want to use it.

“People have been very good with the guidelines so far. They are mostly elderly and they are very willing to comply or they are unable to come because of shielding anyway. People now have to wear masks all the time.

“We still have an organist who comes to play but people can’t sing, which is frustrating. We don’t know if it’s more contaminating to sing but that is the rule at the moment. We can have a choir of six singing but not a congregation, which does feel strange.”

She can no longer serve communion wine but can still serve the bread, which she does by going around the church to avoid people getting up and moving around. She sanitises her hands first.

She said that it was the socialising that people missed most, adding: “We normally have coffee after the services but we can’t do that anymore.”

Rev Walker, who arrived in Sonning Common three years ago from Devon, said that unlike some other churches, she was unable to offer online services for people unable to attend in person.

She explained: “We are not streaming for those who can’t come as I am not up to date with technology, but we do email out our service schedules each week.

“For those who don’t have internet access we try to ring round just to keep in touch and make sure they are well.”

Rev Walker said the churches were losing the money they usually received from collections as these are not allowed.

But she added: “We have a parish church giving scheme, which the majority of churches are signed up to, and people can donate through that.

“We do have a contactless card machine to use at services but we haven’t used it yet. We are also losing money as the fundraising events we’d usually have aren’t happening.

“There are some financial concerns but I don’t know if anyone can predict the impact of it or whether it will be long term as we just don’t know. We are concerned but we aren’t panicking.”

Rev Walker said the pandemic was having a negative effect on churches generally, especially during the lockdown.

She said: “We all found it hard to close the church. Historically, churches have been a place where people can go and pray and be still.

“We are totally at the mercy of the Government — it’ll be up to them to say if churches need to shut again. I hope it will leave it up to us because at the moment we are fine.

“The challenge will be services around Remembrance Sunday, which is huge and we normally get hundreds of people visiting the church.

“We don’t know what’s happening and are waiting to see what the recommendations are from the Government or the Royal British Legion.”

Meanwhile, the Christ the King Church hall has opened again for dance classes, yoga groups, book clubs and other groups to use.

Rev Walker said: “There are two covid-19 risks assessments, one for the church and one for the use of the hall.

“We keep a covid-19 first aid kit by the door in case anyone starts to show symptoms.”