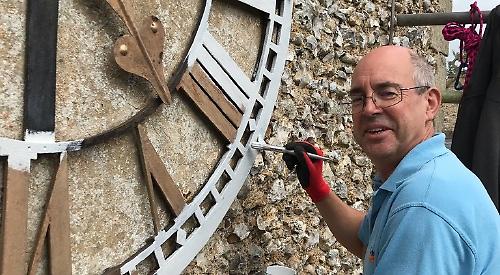 THE clock at Checkendon church is positively glowing.

That’s down to the amount of
24 carat gold leaf that has been applied to the dial and hands.

Volunteers John Sheppard and Jon Hayes spent about four days redecorating the clock on the tower of St Peter and St Paul’s Church in Main Street from the top of 10m-high scaffolding.

The metal clock, which was made in 1855, stopped working in March so it was decided to repair and refurbish it at the same time.

Chris Gamester, a horologist from Wallingford, was brought in to inspect the system and found there was a problem with the hour and minute drivers.

John, 69, said: “We were hoping to do the regilding and redecoration of the clock this year but then it stopped working.

“The horologist needed to access it from the outside so it seemed a good opportunity to put up the scaffolding and do both jobs at the same time.”

The problem with the clock was it would stop between the hours of seven and nine. This was caused by the hour hand getting stuck on the clock face and then sticking together with the minute hand.

John, a retired international hotel salesman, said the clock was otherwise in a good condition. “The clock face is made of either cast iron or a mild steel and was gilded,” he said.

“The original paintwork was still very good but we don’t know how long ago it was last painted.

“We removed the hands and the whole clockface was rubbed down and any rust or loose material was sanded down.

“We added a coat of metal primer and two coats of metal gloss paint before we applied the gold leaf using a paper transfer and it provided an instant result.

“If you are working indoors you can use loose gold leaf but use it outside and the slightest bit of wind or even your breath could lead to disaster.”

The men used about six books, comprising 25 pages of gold leaf, which cost about £10 each. The total cost of the work and repairs was about £1,400.

John said: “The gold leaf took about half a day and a coat of paint might take an hour-and-a-half but then you would have to wait for it to dry.

“It was very, very exciting with the transferring. The clock had not been redecorated for 40 or 50 years and you can stand back and see the results.”

John, who used to live in Checkendon before moving to nearby South Stoke, has worshipped at the church for 20 years and his wife Jane is a churchwarden.

Jon, 54, lives in Checkendon with his wife Sian, a practice nurse in Woodcote, and their children Rhian, 15, and Elin, 13, who attend Langtree School.

He works as an engineer in the rail industry and has wound the church clock weekly for the last four or five years.

Jon said: “I enjoyed being out there in the weather and it was my first experience of gold leaf. John has used it before so I was his apprentice.

“I am an engineer by trade and I usually do the top of the church as I am more comfortable with heights.

“The response we have had from people makes you realise just how many people look at the clock. When it catches the light it looks really great.”