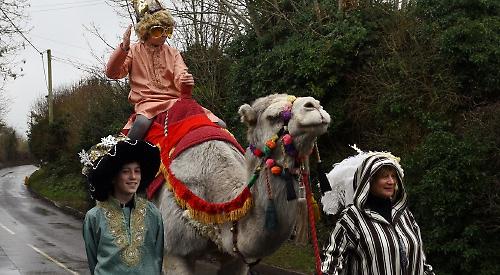 ABOUT 200 people attended a recreation of Mary and Joseph’s journey to Bethlehem.

The Christmas Eve procession began at Ewelme village recreation ground with a prayer, reading and carol.

The villagers were then led through the village by Rev Stephen Cousins, priest pastor for Benson and Ewelme Churches, and two donkeys with Mary and Joseph, who were played by children in costume.

The first stop was the school green where shepherds were “watching” two sheep in a pen. There was another reading and a carol.

The procession then continued to Manor House for more readings and carols before the final stop at the Shepherds Hut pub, or “the inn”.

There was a final reading and carol before Joseph knocked on the door and it was answered by landlord Gary Flux, who was dressed as the innkeeper.

The three kings then appeared from Eyres Lane with Kokoso the hired camel. All the parts were played by village children and pupils at the primary school. The donkeys belonged to a churchwarden.

Rev Cousins said: “When the three kings and Kokoso appeared over the horizon, children and adults alike were very excited to see them. It was a wonderful start to Christmas.”