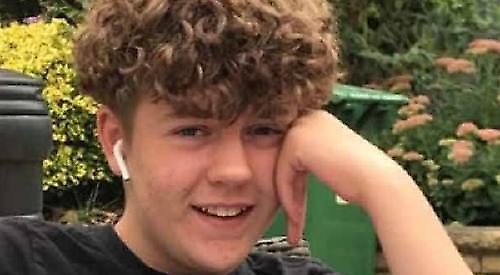 THE parents of a boy who was murdered after a row on social media have renewed their appeal for an end to knife crime.

Stuart and Amanda Stephens spoke on the first anniversary of their 13-year-old son Olly’s death, which was marked by a remembrance service.

Olly was attacked after being lured to Bugs Bottom fields in Emmer Green on January 3, 2021.

Two boys, aged 14, were found guilty of his murder in September. The pair and a 13-year-old girl, who admitted manslaughter, were sentenced to a total of 30 years in a young offenders’ institution.

On Monday, about 100 people, including friends and family, attended the service at St Barnabas Church in Emmer Green. Reading East MP Matt Rodda was among those present.

The service, which was led by the Bishop of Reading, the Rt Rev Olivia Graham, was relayed on loudspeakers outside the church where about 200 more people had gathered.

A slideshow of pictures of Olly’s childhood were shown to the congregation before his mother read a poem and his father recalled some of his favourite memories of his son.

At 3.46pm, the moment Olly died, there was a minute’s silence.

After the service, the congregation were invited to light candles in Olly’s memory.

Mrs Stephens told the crowd outside how much she missed her son.

She said: “You don’t just lose someone once, you lose them over and over, sometimes many times a day. When the loss is momentarily forgotten, it creeps up and attacks you from behind. There are fresh waves of grief as the realisation hits home they are gone again.

“I am Olly Stephens’s mother. This did not end when he was killed, I will always be his mum. I love Olly, I miss him, I grieve the loss of him every minute of every day.”

Mr Stephens told the BBC: “I still expect him to walk through the front door or hear him up in his bedroom.

“He was such a massive part of our entertainment always had us laughing.

“When you come home it’s the quiet and the silence and the sadness and everything is painful because there’s a memory in everything.”

Mrs Stephens added: “It has been a living nightmare — horrific. Even though it has been a year, I feel I am looking on life rather than living it. I feel removed from it. You’re in pain all the time, aren’t you? You feel so sad, it’s painful. I woke up on Christmas morning and just cried and I did the same on Christmas Eve.”

Olly was stabbed twice in the chest and back with a knife during a scuffle after being lured to the fields between Hunters Chase and Gravel Hill by the girl.

Jurors at Reading Crown Court were told the killers had shared several messages on Snapchat in the days leading up to Olly’s death, which demonstrated hostility towards him.

Mr and Mrs Stephens have campaigned for greater awareness of the dangers of knife crime among young people. They also want measures to prevent children from being exposed to harmful material on social media.

They have previously urged the parents of teenage children to “take their phones off them” after warning how social media “played a massive part” in their son’s death.

Mr Stephens said: “We want people to remember Olly how he was and not the way he died. The service will raise awareness of knife crime and get those conversations started in households — talk to your children.”

The couple have been lobbying MPs to support the Online Safety Bill, which aims to hold technology giants which own social media websites to account.

Mr Stephens said there were 11 platforms involved in Olly’s case.

“Nobody warned him, that we are aware of,” he said. “Nobody said to him that they were planning this and this was going to happen.

“We had Olly on that morning and looked at his phone and didn’t understand a thing that was on it.

“We didn’t see any of the evidence that we saw in court on his phone because he had learned to hide it. How can he do that?

“I wrote an email and was quite frank in what I said. I wanted it to be hard-hitting and I wanted every politician of all parties to read it and I have had some very positive replies.

“Hopefully, with the bill we can start making these companies accountable. They make millions of dollars off these apps and, as parents, we have got no protection from them.”

The Bishop said: “There is no grief like the grief of parents who have lost a child or a sibling that has lost their brother of sister.

“It’s completely devastating and not something that one ever gets over.

“I think that the family have been tremendously courageous in the way they have taken something evil and terrible that’s happened to them and in the depths of their loss have found the energy to be able to say we want to do something about this.”