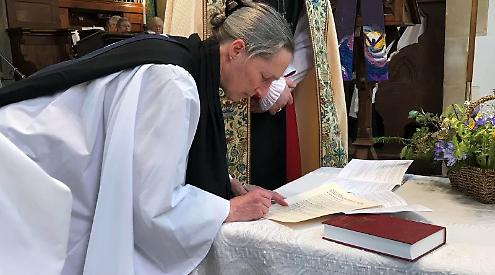 A NEW assistant rector has been appointed to the United Benefice of Shiplake, Dunsden and Harpsden.

Rev Sarah Nesbitt was licensed at a service at All Saints’ Church in Dunsden led by the Bishop of Dorchester, the Rt Rev Gavin Collins.

She has spent the last three-and-a-half years as a curate in the benefice, where she carried out her training following her ordination.

Rev Nesbitt, who lives in Crowmarsh Gifford with her husband, said: “I am very happy to take on the role.

“I am delighted to be able to stay here. The benefice has given me so much support and encouragement throughout my curacy, it feels right to be staying and taking on additional responsibilities. It takes about three years to begin to know a parish well, so really I’ve only just begun my work here.”

Rev Nesbitt was raised in Hove and moved to Crowmarsh in 1989. She worked for the pharmaceutical industry and ran her own business before coming forward for ordination.

She said: “I started becoming active in the church when my first son was born nearly 30 years ago.

“I used to lead Sunday school, was on the parochial church council and was a churchwarden for eight years.

“The vicar kept saying I should consider ordination and eventually I did.

“Some people think we only work on Sundays but most church leaders only have one day a week off.

“Our other roles include administrative duties, visiting people who are housebound or in care homes, working with the local school and being invested in the community.

“I have also worked as a street pastor in Wallingford since 2011, which involves going out on a Friday night and making sure everyone is okay. I’m looking to bring this to Henley.”

The role of the assistant rector is still being defined by Rev Nesbitt and the rector of the benefice, Rev Robert Thewsey, as it is an unconventional position.

She will have to fill in for him for three months this summer while he takes a sabbatical.

Rev Thewsey said: “Sarah was the obvious choice to take over my duties. I feel very comfortable leaving the role in her responsible hands.”