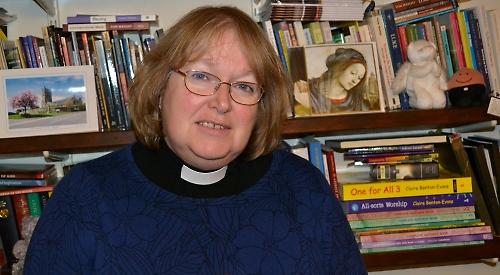 THE vicar of St Leonard’s Church in Woodcote has been appointed area dean for Henley.

Rev Linda Smith, who has been in post since 2009, is now responsible for 21 Church of England parishes across South Oxfordshire including Goring, Woodcote, Whitchurch, Harpsden, Henley, Sonning Common, Dunsden, Stoke Row and Nettlebed.

She replaces Rev Kevin Davies, the vicar of St Peter and St Paul’s Church in Checkendon, who had completed his five-year term.

She will provide support to churchgoers and clergy across the deanery and will be their first point of contact for issues to be raised with the Diocese of Oxford.

Mrs Smith, who is 54 and married with three children, will continue to lead the team at St Leonard’s. She moved to Woodcote from Cornwall, where she was priest-in-charge of three parishes.

She spent part of her childhood in the county and worked in psychiatric nursing there before training for the ministry in 2009.

She decided to move to Woodcote as it is nearer Oxford, where her parents met and married and where she lived from age two to eight.

During her time in the village she has introduced a monthly “open door” service with music and talks as well as an annual All Souls’ service for parishioners to remember loved ones.

She also started a regular “messy church” arts and crafts session for children at the village hall and began food bank collections for needy families in South Oxfordshire and Reading. Mrs Smith, who is also the Henley deanery’s vocations advisor and spiritual director, said: “It is a great privilege to have been appointed area dean. Some people are talking about it as if it were a promotion but I’m not sure that’s the right way to look at it!

“It wasn’t expected but I’m delighted that I’m in a position to serve the church and the wider community. I have very much enjoyed working in Woodcote since I moved here. It is a lovely village and the congregation is a very active part of it.”

“The churchwardens and the parochial church council are very happy to support her in her new, additional role and I’m sure the village will join us in extending heartfelt congratulations.”