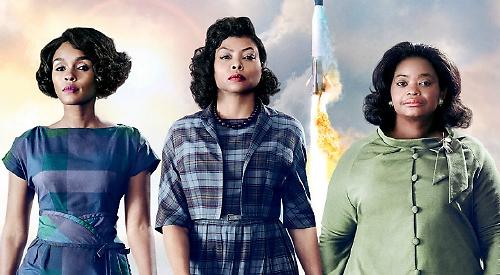 MANY will know the story of America’s fight against Russia in the Space Race.

However, few will have heard of the group of African-American women who provided the mathematical calculations behind the remarkable feat of sending a man into space.

Sound unfamiliar? I’m not surprised. This particular chapter of American history, where prejudice and racial segregation were rife, has remained largely untold — until now.

Hidden Figures is the incredible true story of Katherine Johnson (Taraji P Henson), Dorothy Vaughan (Octavia Spencer) and Mary Jackson (Janelle Monáe) — brilliant women working at NASA, who served as the brains behind one of the greatest operations in history — the launch of astronaut John Glenn into orbit.

This achievement restored the nation’s confidence, turned around the Space Race, and galvanised the world. The visionary trio crossed all gender and race lines to inspire generations to dream big.

Such was Johnson’s achievement that in 2015 she was awarded the Presidential Medal of Freedom by Barack Obama.

This has all the makings of box office gold — an awe-inspiring true story, a struggle to triumph in the face of huge adversity and an emotional narrative set within a wider, exciting plot of space exploration at the dawn of the new age.

Indeed, the first person in space may have been a man, but he couldn’t have done it without the gifted team of women behind him. It’s no surprise then that the film has been nominated for several Oscars, including the best picture award. Director Theodore Melfi has had to weave the mood of early Sixties America with a key turning point in history.

Rewind almost 60 years and it was very much a man’s world, and a white man’s world at that. Geniuses they may have been, in 1961, where the main story takes place, the civil rights movement hadn’t yet reached the folks at NASA.

The film is now showing at Henley’s Regal Cinema.