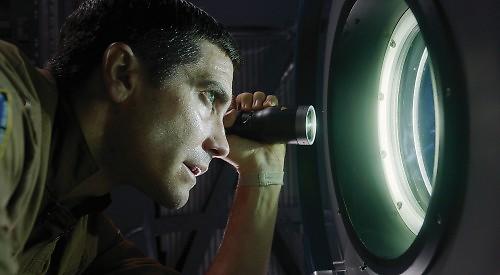 Five years later, NASA’s twin Viking probes orbited the planet for more than a month before successfully sending down landers.

The images that came back caused a revolution in our ideas about water on Mars.

Nineteenth century astronomers peering through their telescopes at one point believed they had detected long, straight “canals” on the planet’s surface.

These were later found to be an optical illusion, but the theories influenced the young English writer HG Wells, who went on to write The War of the Worlds.

He famously had his tentacled Martians land on Horsell Common near Woking before rampaging across the Home Counties in their towering three-legged fighting machines equipped with heat rays and chemical weapons.

Closer to our own time, the direction of travel has tended to be the other way round, with Matt Damon getting stranded on the Red Planet in Ridley Scott’s 2015 adaptation of Andy Weir’s bestselling novel The Martian.

In that respect, this week’s film, directed by Daniel Espinosa, is a sort of halfway house.

Starring Jake Gyllenhaal as astronaut Dr David Jordan, Life tells the story of the six-member crew of the International Space Station, who find themselves on the cutting edge of one of the most important discoveries in human history — the first evidence of extraterrestrial life on Mars.

The opening section of the film sees the crew tasked with capturing a space probe returning from Mars with a sample inside.

This they successfully do, after which Mission Control asks them to study the sample using the ISS’s onboard laboratory. However, the study eventually backfires as the organism displays incredible strength and gains intelligence.

Trapped aboard the ISS with the rapidly-growing organism, the crew must find out how to kill it before it manages to escape and decimate Earth.

There are echoes here of Ridley Scott’s 2012 film Prometheus, which was itself intended as a kind of prequel to Alien (1979).

HR Giger, the artist who designed the Alien, later worked on 1995’s Species, which itself spawned a number of sequels.

Whether Life is intended to enjoy this sort of cinematic afterlife remains to be seen, but the film is showing from today (Friday) at Henley’s Regal Picturehouse.